The Essential Forest-Gardener – the trees and the heritage

Apples are the signature crop of our forest garden. Pip fruit trees thrive in the temperate climate and loamy soils we enjoy here in southern New Zealand and we have built our forest around them. Other forest gardens in warmer parts of the world feature sub-tropical or tropical staples like banana, papaya, mango or oranges, and those favoured trees influence the design and management of those gardens significantly, perhaps causing them to have canopies that are more open or closed, understories denser or less complex, and likewise, ours is shaped by the presence of fruit trees that like to have the wind flowing through their leaves and enough sunlight to colour-up their autumn-ripening fruits.

Thanks to the efforts of the region’s settlers, the apples we have been able to source for planting here are as varied as can be found anywhere in the world. We have trees from the “home country”, whether that was Britain, France, Holland or America, brought over on the sailing ships that delivered the first waves of settlers to our region, as well as shipments of apple “whips” imported by nurserymen to bolster the orchards of later immigrants to the new land. The conservative nature of Southlanders meant that though aged and infirm, those same trees some 100 years later are still growing, unmolested if unpruned, in farm orchards and in and around the older villages of the region.

It didn’t take much to learn the fundamentals of grafting and armed with secateurs and a head for heights, we collected scions; pencil-thick branch-tips, from the untended apple trees and brought them home for attaching to vigorous young rootstock. The result was a young and very special orchard of beautifully named and wonderfully tasting apples; Merton Russet, Warner’s King, Adam’s Pearmain, Yellow Ingestre, Yorkshire Greening, Black Prince; the list of our apple varietes reads like a nurseryman’s catalogue written by a poet. The fruits of dozens and dozens of equally gorgeously named varieties are as different from each other as they are from the modern apples you’d find in the weedless commercial orchards, each occupying its own special niche in the apple world; some for eating straight from the tree in early summer, others to be wrapped in paper and stored through the winter until their flavour reaches perfection, then baked in the oven or stewed in a lidded pot on top of the stove.

Still more, and Slack-my-girdle is a suitably evocative example, make fine cider and won’t please anyone’s taste-buds if eaten raw. There are those which fit neatly into a child’s pocket and can be carried that way to school and whoppers such as the popular Peasegood Nonsuch that a child would struggle to lift.

Apple trees are everywhere in our forest garden, but don’t stand alone the way they do in other gardens, but are instead intertwined and interspaced with other trees, shrubs, annual and perennial herbs, have their crowns wound with vines and their roots interplanted with bulbs, tubers and corms that throw up flowers, leafy stalks or tender vines in the spring. The dense and complex carpet of herbs of the family apiaceae protect the apple trees from the black spot fungus, by intercepting its spores as they seek to gain access to the new apple leaves with the help of spring rains. Wild onions exude their nematode-repelling vapours beneath the soil and clumps of hairy comfrey haul up nutrients from well below the apple-root zone and present them to those roots, in the form of comfrey leaf which collapses exhausted onto the soil in the autumn. Cow parsley and sweet cicely attract aphid-eating hoverflies to where they are needed and borage and alkanet, growing beneath the spreading boughs of every heritage apple tree in the forest garden, signal to the bees; honey and bumble, that there’s their nectar as well as apple-blossom, right here.

With apple trees, and pears also, dictating the make-up and layout or our forest garden, the overall effect is one of a rambunctious orchard, floral and seemingly natural in design. We have pruned our trees and their compact forms are reflected in the years of attention from the secateurs, but as the garden matures, I’m loosening my grip on those cutting tools, as I did on the lawnmower and the spade, and giving the fruit trees their head. They’ll probably create a canopy of their own complex design, like the ones I’ve seen on the old farms of Southland, and I’m looking forward to seeing that filligree against the southern sky. Our fruit-per-tree rate will probably fall, but that’s no bad thing, given that already we struggle to harvest what grows on trees that are only one eighth of their way through their expected lives.

Our forest garden is by no means exclusively apple trees; our list of fruiting trees is long and various; quince, nashi, Mexican hawthorn, Chinese dogwood, medlar, tree fuchsia, New Zealand and Chilean wineberry; all sorts of pip, stone and berry fruits make up the harvest from our forest garden, but apples are king here, or queen more likely, given the beauty of their blossom and the modest form the trees take, their twigs a delicate tracery and their wood that turns a pretty bowl. Along with friends, and with a thought for the neighbours who might not think so highly of our apples, we celebrate with a winter night’s wassailing, involving plenty of cider sampling, a noisy, night-time march around the leafless orchard and enthusiastically delivered words of encouragement for the trees and their health for the coming spring. Given that our heritage trees hale from regions where such ceremonies were once regularly held, I’m sure they benefit from our version of the wassail and thanks to our somewhat muted approach, the neighbours haven’t said a thing. Contributing to that happy state, must be the sound-absorbing quality of our densely planted forest garden. 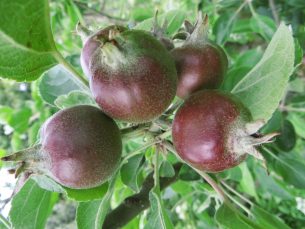