The fascinating story about when some redditors took on Wall Street

The world has been watching, mostly with amusement, as some redditors have brought a Wall Street merchant bank to its knees, by buying stocks in a company, GameStop who has seen better days and whose business model is antiquated.

Members of the r/WallStreetBets subreddit saw that a hedge fund had taken a really aggressive short position on GameStop shares and have been buying shares to drive the price up.  This has hurt hedge fund Melvin Capital and others who had entered into contracts to purchase shares in the company in the future at a price lower than the then current share price, betting that the share value would reduce.  When the share price spiked these contracts became really expensive and the underlying presumption proved to be expensively wrong. 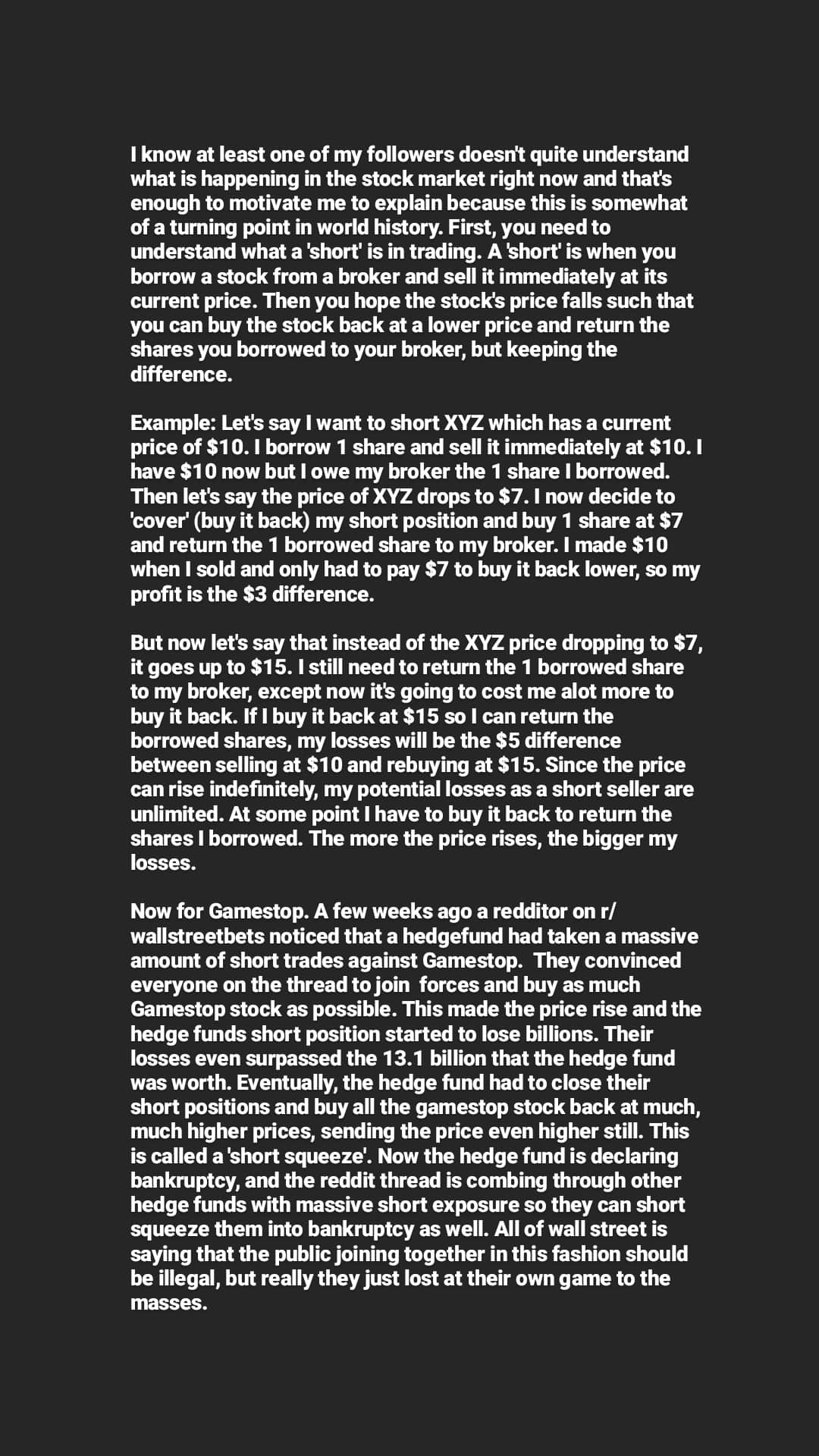 The Guardian has this further description:

The battle has become a war of attrition between a new generation of investors and established, more diversified players.

Investors on the WallStreetBets subreddit forum have been promoting GameStop aggressively, with many pitching it as a battle of regular people versus hedge funds and big Wall Street firms.

“This is quite the experience for my first month in the stock market. Holding till infinity,” posted one user on the thread. Another user said: “We’re literally more powerful than the big firms right now.”

In some cases, they’ve been right, with larger investors like Citron Research taking a sharp lesson in what can happen when “herd investors” squeeze a stock higher.

Citron’s founder, Andrew Left, called GameStop a “failing mall-based retailer” in a report earlier this month and then predicted that the stock would plunge to $20 in a video he posted to Twitter on Thursday.

According to CNN, Left has now given up on shorting the stock, citing harassment by the stock’s backers.

And for a description of the general mode of behaviour displayed by Wall Street over the past couple of decades this video about different investment techniques practised by Wall Street this clip from the Big Short is very informative as well as entertaining.  And it shows how dangerous derivatives and derivatives of derivatives can be, as Melvin Capital is finding out.

And money is being made.  Volatility in stock prices opens up all sorts of opportunities.  To cover its position Melvin Capital has had to buy shares at horrendously inflated prices.  Canny investors have done very well, aided and abetted by the internet collective.

Wall Street is not taking it well.

Listen to this incredible crybaby pic.twitter.com/KmJvZpBQ59

For a contrary view:

Wall Street has made billions on the back of the worst recession since the Great Depression, and fought to deregulate finance to pre-2008 levels. And the moment regular folks beat them at their own rigged game, it's "SHUT IT DOWN."

How about this: financial transaction tax. Now.

The powers that be are trying to change the way that retail stock buying apps made and there are attempts to silence the subreddit.  Which is weird because capitalists always claims that free market capitalism is best.

For instance Robinhood, whose website proudly states that “[a]t Robinhood, we believe the financial system should be built to work for everyone” and how they are on a mission to democratize finance is not quite living up to their goal of allowing the little person an unfettered ability to trade in shares, just like the big guys.

Robinhood and others have put a hold on trading of the stocks.  The move just goes to confirm that Wall Street is for the elite only, not for everyone.

This example really shows the power of the internet and group action.  And the fallacy that the capitalist system constitutes a free unfettered market.