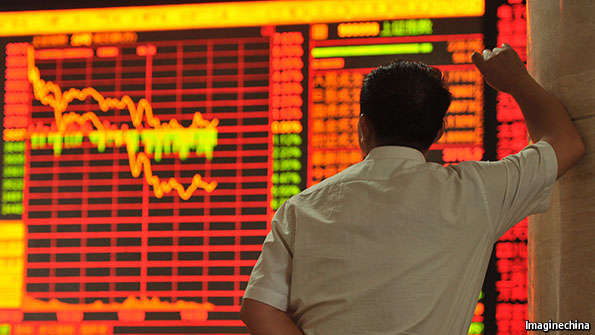 The Chinese share market has recently shown strong signs of being a bubble.  Following a sustained increase in share prices until July this year the market then hit severe turbulence, and previous gains have been well and truly wiped out.

Emergency measures were taken by the Chinese Government to slow down the sell off and showed how different the Chinese economy is to the US economy.  Steps included the suspension of the sale of shares once their value dropped by 10%, the suspension of new IPOs, new cheap credit, Government agencies actively buying shares and a ban of share sales by major shareholders.  A sign of how desperate the measures are that over half of all listed companies have the sale of their shares suspended.

Last night’s news of a further dramatic drop suggest that the measures are not enough.  From the Guardian:

Following three weeks of relative calm, the Shanghai Composite Index plummeted on Monday, ending down 8.5% at 3725.56 – its worst fall since February 2007. Meanwhile the Shenzhen index dropped nearly 7.6% to close at 12493.05 points. Analysts predict more misery ahead for investors in the world’s second largest economy.

Xinhua, China’s official news agency, commemorated the latest crash in a tweet that read: “The return of the debacle!” Two-thirds of all companies listed on the Chinese mainland, or about 1,800 stocks, lost 10% of their value – the maximum daily limit – and were suspended.

Rajiv Biswas, chief Asia economist for analysis firm IHS Global Insight is quoted in the article as saying this:

The government has been trying to hold back the tide like King Canute. This is now a stock market crisis and you can see from the responses that they have been making that they are not really sure how to address it. Today’s developments are just going to put this even more at the centre of their economic problems.”

The basic problem is that the splurge on shares was caused by the stoking of greed and fuelled by cheap credit.  Now many Chinese citizens will have worthless shares and debt to repay.  And the purchase was dependent on never ending growth.

And the implications for New Zealand?  Reduced consumer confidence and discretionary spending power are bound to hurt sales of milk, wine, and other items that we export not to mention a reduction in inbound tourism.  This could be grim.