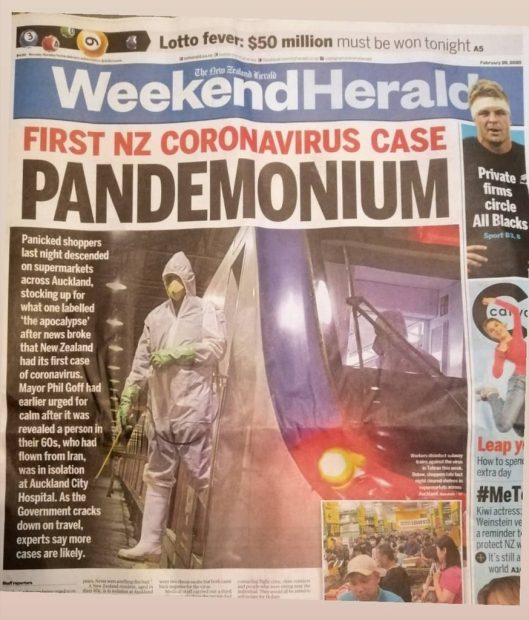 Some evidence of increased supermarket activity on Friday night was amplified into a Saturday morning front page suggesting that we are in the middle of a pandemic.

The cause? One person identified as having Coronavirus.

One infected person does not justify such a headline.

Besides it might have been a $50 million lotto jackpot that justified the long queues.

The headline was excessive with photos of someone in a biohazard suit apparently taken in the UK and another picture of workers disinfecting a Teheran train station.

So yesterday there was a bit of a run on some supermarkets with bottled water and rice big purchase items. I am proud to say I saw no evidence of any such behaviour out west. Maybe westies are just more chilled.

One aspect which did cause me a great deal of despair was the response of the United States administration. Not only have continuous cuts to “unnecessary services” undermined the administration’s ability to respond, but horrendous medical costs will prevent many from seeking medical assistance and the administration is doing what it does and completely misrepresenting the reality of the situation.

See what happens when a serial liar intent on maintaining power at all costs occupies the White House?

Trump has recently hit new lows by describing Coronavirus as a “hoax”.

From Martin Pengelly at the Guardian:

The president made his startling claim at a rally in North Charleston on Friday night. South Carolina holds its Democratic primary on Saturday, with Biden seeking a victory to re-establish his credentials against national frontrunner Bernie Sanders.

“This is their new hoax.”

If words have completely lost all meaning then Coronavirus can be described as a hoax.  Until then there is the thick end of 100,000 reported world wide infections and nearly 3,000 deaths to suggest otherwise.

And reports of infections on the west coast of people with no traceable link to imported infection cases suggests that the virus is now out in the wild and propagating.

In a further jaw dropping development Trump has appointed Vice President Mike Pence to lead the US Coronavirus response.  Pence once said publicly that smoking does not kill.  And when Governor of Indiana he refused to allow a needle exchange program from going ahead and created the worst HIV crisis in the State’s history despite being urged to do so by those who actually understand how virus propagation works.

Siouxsie Wiles at Spinoff thinks we should be reviewing our border arrangements with the US. This seems to me to be a very good idea.