The Hypocrisy of Hate

Last night I sat down to watch the TV news. First up was an horrific item about the slaughtering of over 2000 innocents in Nigeria by Boko Haram. The reporting of it lasted approximately 1 minute, with no commentary other than the item itself. Next up came the coverage about the ‘terrorist’ attacks in France, the news item lasting a good 10 minutes, with numerous external commentators putting in their two cents worth about the senseless shooting of 17 people.

Now, I don’t want to down play how awful the attacks in Paris were, but I do think that the coverage of these two tragedies says a lot about the huge divides between the peoples of the world. We seem unable to view our fellow human beings without categorising them and ranking them in importance. For a start, coverage of disasters in Africa (and other developing countries/continents) are always covered with less naval gazing and hand wringing than in Western (read ‘predominantly white’) countries (think Ebola, which only got coverage because the West were scared it would spread) – so there’s a racial/cultural element at play in where we are supposed to place our sympathies and loyalties – playing to the tribalism of our natures. Then there is the economic/‘developed’ divide, again always framed by our politicians and mainstream media as a ‘them/us’ issue. There’s also the male/female dichotomy – a divide that is always a subset of every other issue. And, lastly, of course, is the religious divide – where fundamentalists on both sides have drawn boundary lines around their beliefs and are willing to police these boundaries with militant fanaticism.

On a smaller scale, we also have the divide between the so-called Right and Left (often merely fancy-dress terms for the Haves and Nots, either economically or in terms of wielding power.) Nowhere is this more evident than the Twitterverse, where bile is distilled into 140 characters and spewed across the ‘opposition’ like lethal poisoned darts. Comments on blogs offer another fertile outlet for articulating this putrid bile. We even enshrine it into our political system, by allowing those who govern us to play an adult version of school-boy bullying in Parliament’s debating chamber.

What sits beneath all this posturing and divisiveness is an unhealthy appetite for hate, fed by fear of the ‘other’. And ignorance. And a determination by those who hold the power not to let it go. Oh, we can dress it up – say that it’s an issue of free speech or freedom of expression – but the truth is that acts which incite the silo-isation of certain members of a community are bred in the cesspool of suspicion and selfishness.

Let’s look at the Paris attacks as an example. Of course I don’t think people should be slayed for drawing a cartoon – but (and I feel defensive just writing this!) what did those cartoons really set out to achieve, other than a one-fingered salute to another’s dearly-held beliefs? If you know a certain group in a society has very strict rules around the depiction of their prophet, and that any breaking of these is considered the very worst of offences, why would you do it? To what end? To prove that you are somehow above this kind of tribal law? To make some statement about cultural superiority? To show up hypocrisy? To lampoon faith just because you can?

I once spent a very disturbing two and a half hours at the Jewish Museum in Vienna (the birthplace of my half-Jewish father) studying an exhibition of the Nazi propaganda used against the Jews in the 1930s and 40s. Cartoons and other gross caricatures made up the bulk of the attack. The images made me feel physically sick, not so much because I related to them as a person of Jewish ancestry (although it gave me much to think about on a personal level), but because the hate that spewed out of them was so visceral and ugly it was hard to believe that anyone could have looked upon them and not been appalled. But as politicians the world over have discovered, the first step towards the annihilation of another group is to demonise them, in order to absolve oneself of guilt. There’s none so overtly righteous as those who have climbed to their dominant position on the bleeding backs of others.

This righteousness is particularly galling, especially given the tensions of our current political times, when East vs West has morphed into Islam vs Christianity. In our predominantly pro-Christian/Jewish discourse, the Islamic fundamentalists are evil incarnate, with no right to be pushing their agendas onto other people. I agree with this, in as much as I agree that no one has the right to push their religious agenda onto anyone else. And herein lies the dilemma, for Christian fundamentalism has colonised and slaughtered on an equally ugly scale across the centuries and is, today, as outrageous in its rhetoric as the Islamic propagandists – and with equally repressive and controlling outcomes.

Look, for example, at the current Republican push in the US to eliminate Planned Parenthood funding permanently from the US health system, desiring to end (in the words of a recent petition attempting to stop it) ‘vital services for the 5 million women and men nationwide who depend on public family planning providers every year. Birth control. Cancer screening. STD testing. Prenatal care. GONE. It’s especially heinous considering Planned Parenthood health centres are often the last resort for women seeking healthcare in low-income communities (1).’

A huge part of it is a push by the Christian anti-abortion lobby ( see New Congressional Bill Would De-Fund Planned Parenthood Abortion Business) – a moral stance that forgets Christian doctrine is about one’s personal relationship with Jesus/God, one’s own conscience, and each person should have the right to choose their own path and make their own decisions, based on their own relationship with their religious beliefs and personal code of ethics. The fact that the US prides itself on the freedoms enshrined in their Constitution (and that the GOP harp on about this in relation to such issues as bearing arms, freedom of speech etc.) makes those who would withhold the right of women to choose their own reproductive behaviour hypocritical to the extreme.
I put it to you that if this had been reported as a proposal mooted by the Taliban, for instance, it would be viewed as the dangerous repression of women’s reproductive rights (and human rights) that it really is. But because it’s framed within the context of a supposed ‘civilised’ Christian country, it is somehow seen by huge swathes of the population (in the US at least) as acceptable – and desirable.

This is, of course, led by the Christian Right, who have worked tirelessly in the last few decades to increase their power and leverage in the US policy-making process. If you don’t believe me, watch the terrifying documentary “Jesus Camp”  ( or THIS  for some of the more extreme ‘highlights’). Here you will see motivational pastors asking hyped up kids if they are ‘willing to give up their lives for Jesus” (much hand waving and hysterical crying), “we’re going to break the power of your enemies in government”, “we can’t sit back and accept corrupt govt; I believe God wants to put godly righteous people in government”, “take these prophesises and do what the apostle Paul said and make war with them” …

The hysterical and carefully orchestrated scenes depicted in this documentary are no different from the clips of gun waving Islamic militants we are subjected to day after day on TV news programmes. But where we condemn the latter (and it fills us with fear) we either condone or ignore (albeit perhaps in a perplexed way) the same fanaticism in our own tribes. And where it causes real outbreaks of violence (it’s impossible not to mention Israel’s persecution of the Palestinian people here) we still don’t speak up against it very loudly if the perpetrators are seen to be on our ‘side’. 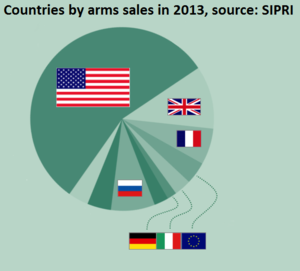 What is really frightening is that those at the top know, cynically, how good war is for business and bottom lines. Yes, the general populations will suffer most hideously, but businesses will prosper. The weapons industry is estimated at over 1.5 trillion US dollars annually worldwide (2.7% of World GDP) (2) , then there are chemicals, uniforms, food, infrastructure… on and on. And, wouldn’t you know it? The world’s ten largest arms industry companies are all either US or European (3). War is propping up their economies. War is their bread and butter. Their default mode.
With our Prime Minster, the (un)Honourable John Key, noted as saying after the Paris attacks that “[t]he targeting of journalists going about their daily work is an attack on the fourth estate and the democratic principles of freedom of speech and expression, which must be strongly condemned” (see the excellent John Key on Media Freedom) one would hope that he would champion the rights of people to express their concerns over Government moves to restrict our freedoms and privacy, and our involvement in overseas Crusades… (sorry, had to take a break here to recover from cynical laughing) … but it is now increasingly dangerous for ordinary citizens to speak out against those at the top.

Deployment of internet trolls, designed to intimidate those who are vocal against such hypocrisies, is now deemed acceptable (‘Oh, everyone does it’), and the name-calling, mud-slinging, vitriolic slurs and abuse dealt out is the very kind of dehumanising behaviour that lies at the basis of all our troubles – the alienation of those who are suppressed by the moneyed power elite. This kind of behaviour is like the drip that, if ignored, turns into a tsunami of hate. The poison that kills over time. The wilful twisting of reality that turns ordinary people into the kind who will hand their neighbours over to the Brownshirts.

That our leaders condone this casual hatred is distressing and worrying indeed. True leaders, visionary leaders (who care more about the people they are representing than their own bottom lines and power), rule through modelling ‘right’ behaviour. If we are now seeing a rise in hate speech, demonising of dissenters and outsiders, silo-isation and disengagement from serious political and ethical debate, then look first to the people who are at the top. They are our role models. They are the people gutting independent commentary. They are the ones undermining our democracy, and turning off whole younger generations to political engagement via their cynicism and ugly attack politics. We deserve better.

223 comments on “The Hypocrisy of Hate ”