The hypocrisy of the Right

Today, we have National’s Judith Collins attacking the Government because the number of Kiwis on the unemployment benefit rose from 17,710 to 20,465 between June and July. Never mind the fact that 17,710 was a 30 year record-low and even 20,000 is 120,000 fewer Kiwis on the unemployment benefit than the best National could manage. Never mind that National has no policy to reduce unemployment even further. Collins just wants to attack Labour and if that means attacking the poorest members of our society at the same time, so be it. 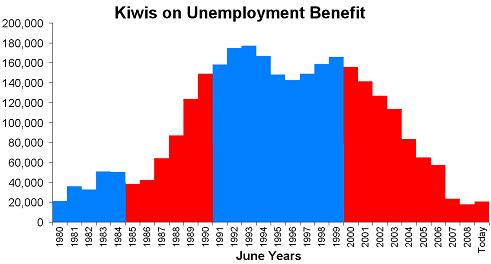 The Right doesn’t really want lower unemployment, of course. Low unemployment gives more bargaining power to the worker through simple supply and demand. That forces up wages (‘labour costs’) and that’s bad for profit margins. That’s why National’s immigration policy and it’s ‘silver fern’ visa is supported by Business New Zealand – BizNZ head Phil O’Reilly says the policy will “make it easy for them to come to New Zealand in order to solve that issue of low unemployment”.

3 comments on “The hypocrisy of the Right ”