OK. They were laughably bad before but now they don’t even have the grammar correct. 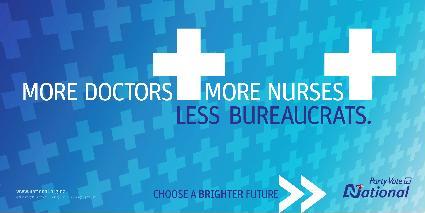 If you can count it, you use fewer: less water, fewer litres of water; less bureaucracy, fewer bureaucrats. Simple. This from the bunch promising to magically raise education standards?

Wait though – since when did National have a policy to reduce the number of ‘bureaucrats’? Isn’t the policy a cap at present numbers (worth 50 cents a week in tax cuts)? And haven’t they actually announced policies, like the new prison and the $1.5 billion in corporate welfare for Telecom, that will require hundreds, if not thousands, more public servants to implement?

Of course, the number of doctors and nurses is actually up significantly since 1999 because the Labour-led Governments have spent billions more on staff and paid more. That spending has been constantly criticised by the Right. So where are they going to get more doctors and nurses from? 08wire suggests the doctor stork or osmosis. I doubt National has thought that deeply about it.