Remember the oil spike? Over the course of the last 4-5 years, oil kept on breaking records, culminating in a massive spike to reach $150 last June. Why did that happen? Some people want to dismiss it as just a speculative bubble but they forget that speculators come to a market that has a fundamental driver of price change. They magnify that price change (and speculation cuts both ways, right now, there’s negative speculation in oil through short-selling) but there’s a real reason for the price change.

That reason ought to be very worrying – our capacity to produce oil was not increasing as fast as our demand for the stuff. The consequence was that the spare capacity buffer evaporated, and that, in turn, prompted the price spike. 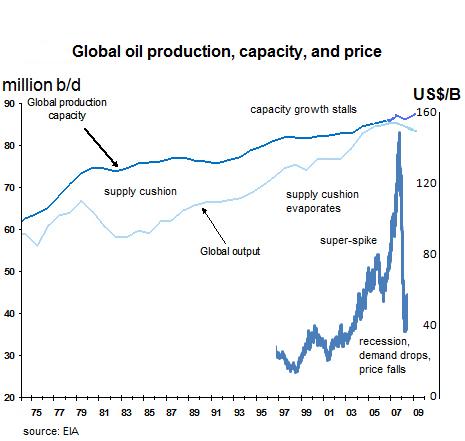 Well, so what, some might argue. The price went up, it destroyed demand and prompted more investment in capacity. The buffer was restored. The price fell. That’s how markets are meant to work. Crisis over.

Not quite. Demand destruction came at a terrible price, a global recession and the capacity issue is not solved, indeed the economic situation has set us up for another capacity crunch in the near future.

Don’t believe me, look at what the International Energy Agency is saying. The collapse of the oil price and the drying up of credit worldwide have been a double punch on investment in oil production capacity. $100 billion in new oil projects has been cancelled because funding for them has gone and there are many other potential projects that can’t get off the ground when there is no credit and the extraction costs are too high to guarantee a profit based on current prices.

Oil projects take 5-10 years from initial exploration to commercial production, and existing fields’ production declines at predictable rates. That means we have a very clear idea now of what capacity will be like in coming years. Right now, we are not investing enough. The IEA has warned that because of this, there will not be enough capacity to meet demand as the world comes out of recession. They predict that the end of the recession will see demand recover particular from India and China, and that will see the capacity cushion disappear once more sparking another super-spike.

The oil market appears to agree. A barrel of oil for delivery in June 2010 is currently going for $129, compared to $50 a barrel for delivery in May 2009. Another oil spike is coming as soon as the economy starts to recover and it will slam the still delicate world economy back into recession. 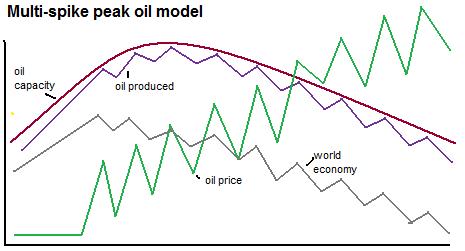 Every time the global economy gets back on its feet, the demand for oil climbs and approaches the stalling or falling capacity to produce oil, sending the price sky-high until the global economy cannot bear it any longer. The nature of private investment may only serve to worsen this trend. During the spikes, it will be all aboard for speculators drving the price higher and there’s investment in both oil capacity and oil alternatives. But come the economic crash the money dries up, the oil and oil alternative investment gets canned because the short-term profit has gone, so that the world stays oil dependent and short on oil production, ingredients for the next spike.

If this is how peak oil will manifest, it’s going to be a long and bumpy ride down for economies addicted to oil. Getting off as soon as possible would be wise.

– Clinton Smith (PS in the past I posited that the oil spike caused the global recession by crippling the housing market. Others (eg these jokers) are arguing this in more detail. I’ll write a synopsis for The Standard some time)

[update: jarbury has a post on the same issues. He adds some important quotes from The Last Oil Shock –