The politics of the Royal Tour 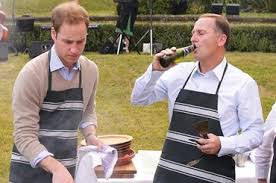 Don’t get me wrong.

I am a proud republican.  This position is based on a number of beliefs, that we are all born equal and should be treated equally, that historically the English Monarchy has much to be ashamed of, that the sort of wealth the modern Royal Family has is obscene, and that skill, talent, community commitment and contribution should be celebrated, not social order.

But I can’t help but feel sorry for William and Kate and George and I can’t help but thinking that John Key is politicising the royal tour in election year in a way that Liz and her whanau may be privately upset with.

The basic problem is Key’s habit of trying to be all things to all people.  And when you think about his various pronouncements on the Monarchy and on constitutional issues you can see a pattern where he says different things to different audiences.

It seems that the tour was in an advanced stage of planning in November of last year.  At the time Key could not say whether a visit would take place, or who might be coming, but that it did not matter that it was an election year.  Obviously he knew something was planned.

Then in January of this year a few days after David Cunliffe’s state of the Nation address Key announced the flag debate.  The concept is something most progressives would agree with.  The presence of the Union Jack in the top left hand corner of our flag is a historical oddity that annoys many of us.  We are an independent proud nation with a history and a world view that is distance.  We are firmly placed in the middle of Pacifica.  To be reminded of an apparent ongoing allegiance to a nation on the opposite side of the world is frankly weird.

Mirroring Helen Clark’s views Key is on record saying that New Zealand becoming a republic is inevitable but he seems to change his position regularly.  Back in 2008 for instance he said that he was “not convinced it [a republic] will be a big issue in the short term“.  In 2010 he said he loved the Royal Family.  In 2012 he said that NZ becoming a republic was off the agenda.  Last year he said this:

“I don’t think New Zealand should rush to become a republic. It may happen one day, but I can’t for the life of me see the benefits of it other than you get to spend a lot of money electing heads of state as opposed to the government appointing one.”

Then on Morning Report yesterday morning Key performed the sort of logical acrobatics that has to be witnessed to be believed.  He said that he had stated that New Zealand becoming a republic was inevitable and that in all probability that was right but there would be a long time scale.  Which is it? Is it inevitable or will it happen in all probability?  Gee the guy is loose with his language.

Yesterday afternoon Key said that the Royals tour had weakened the Republican cause.  From Radio NZ:

However, Prime Minister John Key has predicted that the Queen and members of her family will remain New Zealand’s head of state for years to come.

Mr Key acknowledged on New Zealand’s Morning Report programme he’d once predicted a move by New Zealand to a republic sooner rather than later. But he said on Monday public polling in the past had revealed robust support in this country for the royals and he believed that sentiment has strengthened.

“If you go back about … six or seven, eight years ago – maybe a decade – and asked the question whether New Zealanders want to become a republic then I think the numbers would have been sixty-forty opposed. If you asked that question today I think it would be eight-twenty opposed.”

It is hard to imagine why a visit by a couple of pleasant looking people and their cute baby should put back the cause of Republicanism.

And as Chris Trotter has noted Key should have talked to David Farrar first.  Curiablog has conducted a recent poll that suggests that support for a local head of state is at 44%.  Key’s political antenna are way off.

To cement the feel of politicisation of the tour yesterday afternoon Key has promised to raise the proposed change of flag in discussions with William.

National is heading into some really unchartered waters.  Former head of the Republican Movement Lewis Holden is National’s candidate for the Rimutaka seat.  He will not beat Chris Hipkins but it will be interesting to see if and where he is placed on the list.  And if he does make it to Parliament he will be alongside National MP and former Monarchy New Zealand spokesperson Simon O’Connor.

It is disturbing that it appears the New Zealand Republican Movement Website has removed content describing Key’s many and varying views on New Zealand becoming a republic.  An explanation is warranted.

National and Key clearly have a strategy of trying to be all things to all people.  They just hope that the electorate does not notice that they are being duplicitous in the extreme.

85 comments on “The politics of the Royal Tour ”