The polls and petrol prices

Updating a post from a few months ago, here’s how Labour’s Roy Morgan poll numbers are going compared to the price of petrol since the last election (the price of petrol axis is inverted, lower line = higher price). The trend continues, when petrol prices go up support for Labour goes down and vice versa. Labour hit a nadir at the end of June/start of July when the price of petrol touched $2.17 and has recovered since the price started dropping. 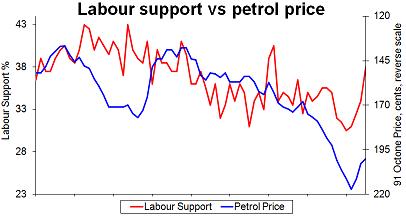 But it also looks like the relationship between petrol price and support for the Government is weakening as we head into the election campaign proper. Now, people are starting to pay more attention to the choices on offer; the general malaise inflected by petrol prices isn’t reflexively taken out on Labour as much as it was earlier this year. Despite petrol still being at near-record prices, Labour’s support is ticking up sharply.

It really has gone all wrong for National in the last month and a half. Their policies – both those announced intentionally and those that have come out via leaks and recordings – have been rejected by the public, the infighting is becoming more and more public, the launch of the campaign has been a insipid disaster, and economic conditions have turned against them too. Meanwhile, Labour’s buyback of KiwiRail has been popular, its tax cuts start in three and a half weeks, and it is clearly keeping powder dry for the campaign proper.

Can John Key really steal defeat from the jaws of victory?

19 comments on “The polls and petrol prices ”