The Press on Standards

The Christchurch Press as part of Fairfax released National Standards data over the weekend, but had a number of articles with a curiously sensible line on it:

…the standards’ main effects will be to impose on schools a crude, misleading and unhelpful form of accountability and to focus attention on learning targets that are inappropriate for many children.

Other commentators have identified the serious dangers of using national standards data when judging the performance of schools. They have noted the inconsistency between schools in how national standards are assessed, the lack of attention to performance in other curriculum areas and important social, cultural and attitudinal outcomes, and the unfairness of publicly releasing information that cannot reveal the true merit of the programmes and teaching of each school.

That was Otago’s emeritus professor of education Terry Crooks.  This Nisbet cartoon was there as well: 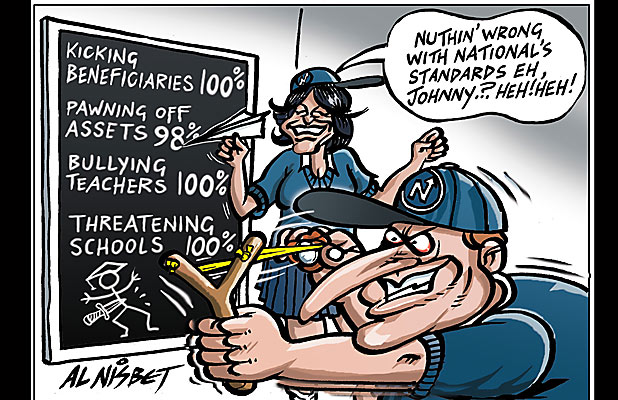 There’s even a piece by David Shearer.

But it’s not all sense.  There’s also an editorial defending the Standards and their publication as well:

“The teachers’ union, some principals, a few school boards and many teachers have deplored Fairfax’s creation of a website on which schools’ performance may be compared, saying it is misleading, will misinform parents and will damage schools.

The outcry is entirely predictable. It is part of a continuing campaign against national standards and it is deeply misguided. It rests in part on a heavily patronising assumption about parents’ capacity to weigh such data in judging how well a school is doing in educating their children.”

Err, no.  It’s because the data has no useful value in it to evaluate a school – as per Keith Ng’s excellent posts.  It is statistically unuseful.  It is unmoderated, meaning schools can’t be compared.  It does not measure against the curriculum, just one small part.  It does not tell us how much value a teacher is adding in even reading, writing and arithmetic, let alone on a broader educational basis. Or how much support a school is getting, either from the government and its board, or from the parents and the community.  It tells us nothing useful.

It does give a (false) impression of being something to grade schools by.  As currently all too many (particularly estate agents) use deciles as a proxy for school quality when it’s purely a measure of the wealth of the local area (and your higher decile means you’re getting less government support…), something like National Standards is certain to get misused.

Especially as this ‘ropey’ data has no correct use…

34 comments on “The Press on Standards ”