National tells us that, if we put the right incentives in place, people will work harder and their incomes will go up. National opposes the 39 cent tax bracket because they argue people would be incentivised to work more and earn more if incomes over $60K were taxed 6 cents in the dollar lower. They slashed benefits and let the minimum wage fall behind inflation because they say benefits and the minimum wage make people lazy and poor. The leftwing parties argue that capitalism unfairly concentrates wealth in the hands of the lucky few and government should help redress this inequality inherent to the system.

National’s policies were in place in the 1990s, leftwing policies gradually replaced them from 2000. So, what happened to incomes? 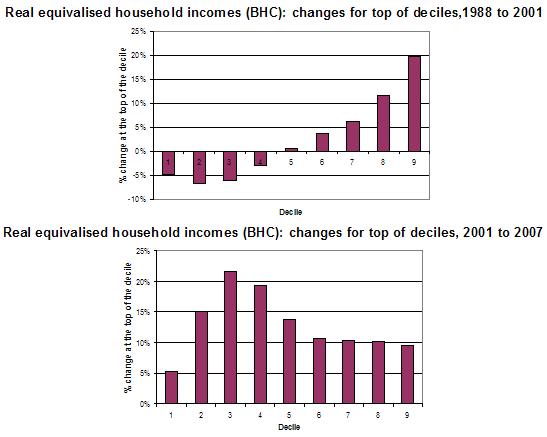 Strange, when people were ‘incentivised’ to work harder 40% of people, the poorest 40%, actually got poorer. It was the richest 10% who did best off National’s policies. That stands in stark contrast to the Labour government period, when everyone got richer faster and the bulk of increase went to lower and middle incomes (although, shamefully, the poorest 10% has been left behind).

While the Left has shown it can deliver social justice without hammering the wealthy, it’s almost like National’s ‘incentives’ were designed to screw the poor and advantage the rich. Almost.

25 comments on “The right incentives? ”