101* of 116 integrated assessment models (IAMs) factored into IPCC synthesis reports mapping a pathway for warming of less than 2 degrees C, include negative emissions technology. For the most part, the technology we’re talking about is BECCS (Bio-Energy Carbon Capture and Storage).

It’s a fantastic idea. (Wired) Grow lots of stuff and burn it to produce electricity while capturing the carbon that results from burning stuff, and bury that carbon in deep ground reservoirs.

There’s even a plant up and running. It can be done! 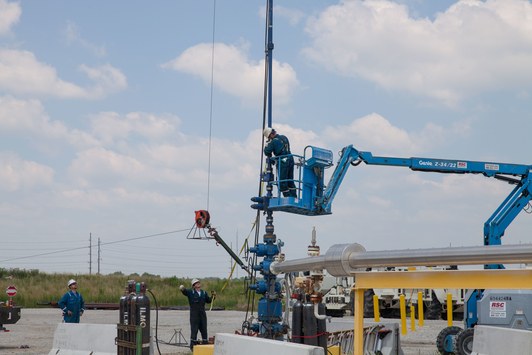 And that there’s a photo of the world’s one and only operating BECCS facility – the Archer Daniel Midland plant in Decatur, Illinois. Impressive, is it not? It’s only taken 15 years to get this far. Only 15 years to store a total of 1.4 million tons of CO2. Now sure, things start off slow and gather pace. The plant reckons it can store another 5 million tons over just the next few years. The US emits about 3 x that every single day. Just saying.

In a recent paper, engineers Mathilde Fajardy and Niall Mac Dowell, of Imperial College in London, explore best- and worst-case BECCS scenarios in excruciating detail. In worst-case scenarios (say, burning willow grown on grasslands in Europe), it’s possible to never even achieve negative emissions. You spend too much carbon transporting crops, preparing land, and building a plant. And even in best-case scenarios (using fast-growing elephant grass on marginal cropland in Brazil), you still need land use on par with [Kevin] Anderson’s multiples of India and water use on par with what we currently use for all agriculture in the world

So here we are. At present rates, not increasing rates of emission, warming of under 2 degrees will be impossible by about 2030. Meanwhile, political leaders and policy makers want us all to put our faith in them and their fixation with an idea Henrik Karlsson had while watching late night TV back in 2007. Henrik may or may not have been stoned. I don’t know.

What I do know is that we need a movement of movements that derails capitalism. That, or we burn. Or, if you prefer the words of an academic – Andrea Malm:

Capital will not lead the exit from the fossil economy. Only a movement of movements can amass a social power greater than the enemy’s in the little time that is left.

*The remaining 15 IAMs work out to below 2 degrees, because in those assessments global emissions peaked in 2010. Some IAMs incorporate both a 2010 peak date and BECCS

66 comments on “The Saviour Machine ”