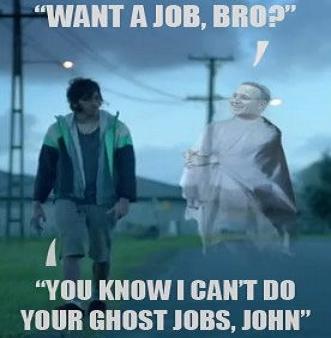 Remember all those jobs the construction of the Sky City Convention Centre was going to create? And how we were going to increase the incidence of human misery and sacrifice the country’s legislative independence just so we could have a convention centre? And the process that was described as banana republic stuff without the bananas?

Well it appears that the construction will create some jobs but many will be in Thailand, not New Zealand.

Half of the work on the steel frames for the SkyCity Convention Centre in Auckland has gone to a foreign contractor, despite New Zealand factories having prepared for it.

With 8500 tonnes of steel frames needed for the SkyCity convention centre, the making and fitting contract has gone to one New Zealand company and a United States-owned company in Thailand.

The loss equates to about 100 full-time skilled welding jobs for 12 to 18 months – and the same thing has happened in two other projects of similar scale.

The government touted job creation as a big plus when it sealed the controversial deal for SkyCity to build the centre in return for large extra gambling concessions.

The government said last night this was the way the free market worked.

Get that?  Selling legislative concessions to a private corporation so that it can increase despair and hardship in our community on the basis that jobs will be created but then having those jobs created in a third world country because their workers are paid less is truly the way the free market works.

The article makes some comment on the promised jobs.

Last night, the Minister, who was travelling in Asia, said in a statement that “any decisions around which building materials are used … will not affect the number of people being employed” to build it.

It was unclear how that could be.

Unclear?  It is perfectly clear the same number of people will be employed in the construction phase.  But they will not all be New Zealand workers.

It appears that the Government must have had a say in this development.  Clause 11.2 of the Convention Centre agreement says this:

SKYCITY must consult with the Crown, and provide the Crown with reasonable opportunity to comment, on which contractors it will request to tender for the Building Works Contract and the basis and contract terms on which tenders will be sought, including, without limitation, participation by the Crown in a procurement workshop with SKYCITY, and appointment of a Crown representative on a panel to be established by SKYCITY to review and advise on buildability.

I read this clause as applying to all tenders, not just the Building Works Contract tender.

So the Government must have had a say in the terms of the tenders.  Why it did not insist that local suppliers should be preferred is not clear.  For an agreement touted as providing economic benefit because of the construction the failure to ensure the contracts were awarded to local suppliers to maximise the economic benefits is extraordinarily negligent.

Update:  Sky City spokesperson Colin Espiner has helpfully pointed out in comments that under clause 5.1(b) of the supplementary agreement clause 11.2 of the agreement has been deleted and there is no requirement for Sky City to consult with the Crown.  This was an interesting change to make and obviously Sky City must have thought that there was a financial benefit in not being required to consult with the Crown about the tender process.