The same years my farm was wiped out by hurricanes, 83,000 people lost their jobs in New York City because of flooding, many of those in manufacturing. Unemployment claims doubled in Vermont along the storm’s path, and 80 percent of U.S. farmland was shriveled by drought, driving up food prices for middle and working class families. It turns out there will be no jobs on a dead planet.

This is from a beautiful, lucid, deeply intelligently piece of writing by a traditional working class fisherman about the confluence of climate change and the working life. He has just handed the world a functional, working model of how to make a living, restore ecologies, preserve communities, and mitigate and adapt to climate change. He also demonstrates that not only are jobs and the environment compatible, they are inseparable.

Bren Smith is an ocean farmer and a climate farmer in Long Island Sound, NY, where grows and harvests coastal marine life. 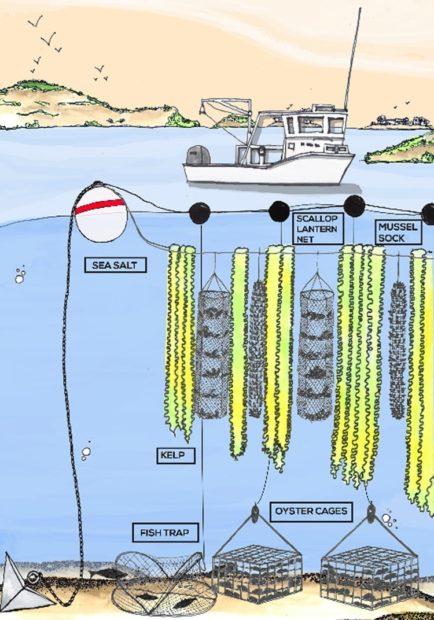 His business and projects tick multiple sustainability boxes and all the elements are interconnected:

Very applicable to a coastal country like New Zealand with significant ocean resources but struggling to manage them sustainably, Smith’s words speak for themselves. Read the full article, but here are some quotes,

If you were to create a network of our ocean farms totaling the size of Washington state, you could feed the planet.

This is zero-input food that requires no fresh water, no fertilizer, no feed, no arid land. It is hands down the most sustainable food on the planet.

If you look for my farm from ashore, there’s almost nothing to see, which is a good thing. Our underwater farms have a low aesthetic impact. That’s important because our oceans are beautiful pristine places, and we want to keep them that way. Because the farm is vertical, it has a small footprint. My farm used to be 100 acres; now it’s down to 20 acres, but it produces much more food than before. If you want “small is beautiful,” here it is. We want ocean agriculture to tread lightly.

Our 3D farms are designed to address three major challenges: First, to bring to the table a delicious new seafood plate in this era of overfishing and food insecurity; second, to transform fishermen into restorative ocean farmers; and third, to build the foundation for a new blue-green economy that doesn’t recreate the injustices of the old industrial economy.

We envision 3D farms embedded in wind farms, harvesting not only wind but also food, fuel and fertilizers. We envision using shuttered coal plants — like the one closing in Bridgeport, Conn. — for processing animal feed and salt. We want to repurpose the fossil-fuel and fishing industries so that they will protect rather than destroy our oceans.

The relationship between farmer and buyer has to go even deeper. Reformatting the food system is going to be costly. It’s going to be complex. Simply using purchasing power will not be enough. Anchor institutions such as hospitals, universities, wholesalers, and retailers have a new role, a new set of responsibilities in the new economy. They have a duty to invest aggressively in our farmers, our infrastructure and our communities. This involves donating a portion of their profits and their endowment to building hatcheries, seafood hubs, logistical and transport systems, incubation, and R&D. This will mean less profit for the private sector and a lower rate of return for universities. But it will also mean more value in terms of social and environmental good. All around us we can see that “business as usual” will not save this planet. It’s time to divest from the old economy and invest in the new.

[As always with my posts, no climate change denial or ‘it’s too late to do anything/we’re all going to die anyway’ comments, thanks]

119 comments on “This is what sustainable fishing looks like ”