Towards an inclusive, democratic left

The political Left needs a new direction with a break to the future, to prevent the on-going rightwards drift. If progressive political parties merely react to the ruling neoliberal discourses and policies, they will continue to inadvertently absorbed right wing values. A re-vitalised Left would be strengthened by working towards a more inclusive, diverse participatory democracy.

The neoliberal policies and anti-democratic approach of our current government has led the country backwards.  It has re-masculinised the political landscape and undermined gender equality, with high status given to male leaders and  the traditionally masculine finance and economic portfolios.  It can be seen in the WEF gender gap survey. This shows that, with respect to Political empowerment, NZ’s ranking has slipped from 8th in 2011 to 9th in  2012: for Economic participation and opportunity NZ has slipped from 11th to 15th.

Unfortunately opposition parties have absorbed these changes by trying to oppose the government on its own terms.  There is no one person or organisation at fault in this.  It is the result of the interplay of the NAct values spun through their PR machinery and viral foot-soldiers; the MSM editors and journalists who often unquestioningly repeat neoliberal and masculinist discourses; and opposition politicians and strategists, who try to beat the right wing strategists at their own game.

One of the consequences is the under-reporting of the solid and committed work by opposition women MPs on various crucial issues to do with community well-being, poverty, and social justice; on the way the NAct government sacrifices women at the forefront of enacting controversial social policies.  There needs to be more acknowledgment and prominence given to some of the great work being done by and/or for women. For instance Julie Anne Genter taking it to Bully Boy Brownlee in the House; the low income women, struggling along side Mana for affordable rentals and against the cuts to state housing; Sue Moroney with her private members bills on PPL and redundancy;  Annette King on housing (even though her approach maybe falls short of Mana’s policies); Metira Turei on the streets for anti-poverty campaigns and working in the house for children in poverty; Darien Fenton for workers rights and free public library services …. and more….

A new way forward would value such struggles, while not supporting the “reheated Blairism”, that Chris Trotter rightly associates with the current NZ Labour Party and Josie Pagani.  It is necessary for Labour to reconnect with low income people, working to improve their increasingly difficult circumstances.  But this should not be done by demonising the “undeserving poor” and  supporting John Tamihere as expressed by Josie Pagani in an NZ Herald article this week. This is a patronising and conservative middle-class approach, that reinforces stereotypes and divisions.

We can learn from some of the positive developments during the 20th century. The Left was progressing towards a more inclusive politics and society when it was brutally halted by neoliberalism. When I was living in London in the late 70s and early 80, it was a productive time of intense debates, tensions and collaboration.  Diverse left wing groups interacted through feminist, gay, lesbian, anti-racist and working class networks. The beginnings of a diverse and united Left could be seen during the miners’ strike 80s.

Feminist and gay groups joined together to protest the pit closures.  This collaboration began uneasily, but was gaining ground.

Something similar happened in NZ during the 1981 protests against the Springbok rugby tour. The accompanying images, are very much of their time, indicating that such strategies need to be revised, revised with hindsight, and re-worked to fit current circumstance. 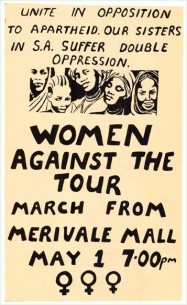 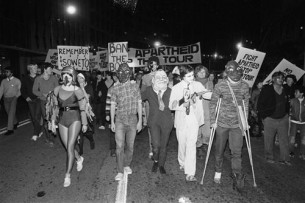 (Side note to those who smear pseudonymous left-wing bloggers: powerless people often feel a need to mask their identity when challenging the dominant discourses and ruling groups – some in the 1981 demonstrations wore masks, and surely not a sign of being similar to hooded racists violently persecuting oppressed people.)

An inclusive and democratic left is a goal to work towards, with on-going analysis of the dangers and pitfalls of being dragged back into divisive in-fighting, or the assimilation of the destructive discourses of the right wing elite that we are struggling against. I don’t expect such an integration to be completed over night, or in a weekend.

What can we do to move in a new direction?

46 comments on “Towards an inclusive, democratic left ”