Here’s the key part of Treasury’s report on the impact of swine flu, released on Friday:

Typically Treasury, it’s more interested in GDP than anything (not to say the effects on the economy won’t be big – it should extend the recession by another two quarters). I’m more concerned about 0.08% population mortality rate, which is derived from the swine flu having the same 0.25% mortality rate of ordinary flu. You see, 0.08% of 4,250,000 is 3400 deaths. Separately, the Ministry of Health is predicting more than 4,000 extra hospital admissions on top of the normal 31,000 in a winter month, placing real strain on the system.

The natural reaction is to scoff (God knows we’re had wolf cried enough recently) but consider there has already been a death in Australia, over 100 deaths in the US and Canada, 180 worldwide. With 44,000 cases so far worldwide that’s a 0.4% mortality rate, a bit above the 0.25% of ordinary seasonal flu.

But remember, it’s not the mortality rate that is unusual about swine flu, it’s the infection rate. They think 30% or more of people will get it compared to about 5% of adults and 20% of children who get seasonal flu in an ordinary year. Again, it’s easy to scoff, especially with only 250 confirmed infections in NZ so far. The number of infections is increasing at an exponential rate. From the WHO: 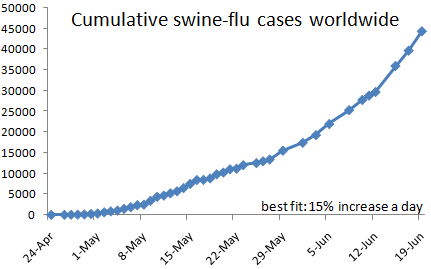 15 comments on “Treasury on swine flu ”