Turkey is in trouble and the US is part of it

I figure that the US is unhappy with ultimatums and other rash actions from Turkey. I figure this because the MSM has started printing articles entitled something like “Turkey’s actions make world war more likely.” Whoah!

However when I looked at the very same NZ Herald article again this morning, the title of the piece had changed to a much milder “Turkey’s increasingly desperate predicament poses real dangers.”

Very interesting! The guts of the article seems unchanged however.

“Turkey is facing a multifaceted catastrophe,” said Gokhan Bacik, professor of international relations at Ankara’s Ipek University. “This is a country that has often had problems in the past, but the scale of what is happening now is beyond Turkey’s capacity for digestion.”

A rift with the United States, Turkey’s closest and most vital ally, over the status of the main Syrian Kurdish militia, the People’s Protection Units (YPG), has further exposed Turkey’s vulnerability. A demand by President Recep Tayyep Erdogan that Washington choose between NATO ally Turkey and the YPG, its main Syrian ally in the fight against the Islamic State, was rebuffed by the State Department this month, despite Turkish allegations that the YPG had carried out the bombing in Ankara.

On Saturday, Turkey dug in, demanding unconditional support from the United States. “The only thing we expect from our U.S. ally is to support Turkey with no ifs or buts,” Prime Minister Ahmet Davutoglu told journalists in Ankara.

Turkey now stands completely isolated, trapped in a maze of quandaries that are partly of its own making, said Soli Ozel, professor of international relations at Istanbul’s Kadir Has University.

“It has so alienated everyone it cannot convince anyone to do anything,” he said. “It is a country whose words no longer carry any weight. It bluffs but does not deliver. It cannot protect its vital interests, and it is at odds with everyone, including its allies.

“For a country that was until very recently seen as a consequential regional power, these facts strike me as quite disastrous,” he added.

The next article is very informative and provides some historic background dating back to the Ottoman Empire as to why the Turkish are reacting so strongly to the Kurds gaining real territorial, political and military standing. From the website of The Saker the article entitled “Turkey is screwed and it’s all the US fault“:

When the modern Turkish state was created on the ashes of the Ottoman empire following defeat in WWI, it was seeking a new identity on which it could successfully establish itself. The new young Turkish elite chose the model of nationalism, at that time a progressive concept so popular in contemporary Europe.

Turkey, just like some of its European counterparts, was however faced with the imperial heritage of diverse ethnic groups living on its newly established territory. There were large and ancient communities of Greeks, Armenians, Kurds and many other people living in Anatolia and the European part of Turkey. Ethnic Turks themselves were relative newcomers to these parts of the world, having arrived only in the 11th century. Greeks and other ethnic groups, on the other hand, can trace their presence in what is now Turkey well into the Bronze Age and beyond (3300-1200 BC).

The Turks managed to solve the Greek question after the Graeco-Turkish war of 1919-1922 and the large exchange of population which followed it. Most Greeks left Turkey and Turkey received an influx of ethnic Turks from Greece in return. The Armenian question got solved already during WWI in what many call the Armenian genocide. Term which Turkey fiercely opposes. It was a forceful deportation of Armenians into the Syrian desert. It is estimated that about 1.5 million of them died. Turkey acknowledges the fact of the deportation, but claims that loss of life was an unintended consequence rather than a deliberate act.

One ethnic question which Turkey however did not manage to solve is the Kurdish question. The Kurds are an ancient community of Iranian people who accepted Islam. They were skilled soldiers and played an important role in Islamic armies, including the Seljuk and the Ottoman. Indeed, the most famous historical Kurdish figure is Saladin (name under which he is known in the West), a Muslim general who reconquered Jerusalem during the Crusades and a sultan of Egypt and Syria.

The Turks tried to solve the Kurdish issue by straightforward assimilation. They announced that from now on, Kurds are simply „Eastern Turks“ and banned the Kurdish language. The Kurds resisted and the Turks answered with repression, forced relocation, discrimination and heavy handed military crackdown. Kurds in Turkey are since then in de facto constant rebellion and a, sometimes less sometimes more intense, war with the Turkish government, which claimed thousands of lives on both sides. 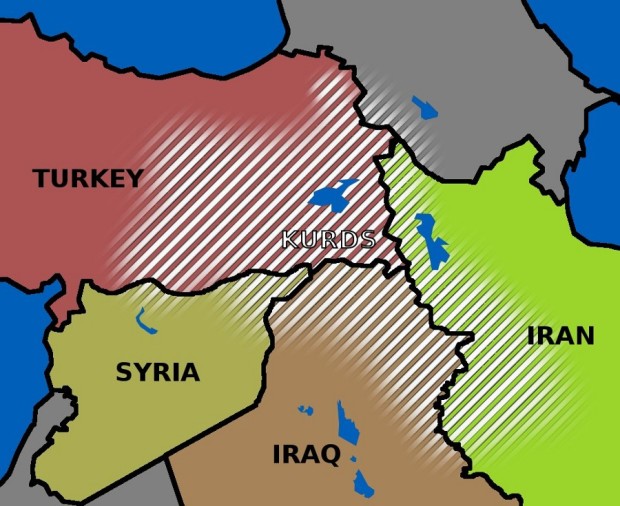 Turkey is, unsurprisingly deeply unhappy that it’s erstwhile “ally” the US has been militarily and diplomatically supporting the same Kurdish forces that it regards as a terrorist threat against itself and against its (ahem, Islamic militant) interests in Syria.

A recent episode of RT’s Crosstalk put it best: Turkey, a NATO member, is now shelling and bombing the Kurdish forces in Northern Syria which are being supported by the US. Those US backed Kurdish forces are the ones who have been successfully fighting to destroy ISIS and other extremist Islamist militant groups (remember Kobani?) that are being funded and supplied by Turkey.

In essence, we have the ridiculous and dangerous situation of US proxies and Turkish proxies fighting a proxy war against each other.

And of course we now also have Iran and Russia in the region backing their own interests and geopolitical goals. With ordinary Syrian citizens in the middle of this destructive meatgrinder.

What could go wrong?