It is really quite something to be watching in real time, the implosion of twitter at the hands of Elon Musk. The latest installment played out in the past few days. Background from Wikipedia for the tweets below,

Musk completed the acquisition on October 27, 2022 for $44 billion. Musk immediately fired the top three Twitter executives. About a week later, he began laying off about half of the company’s approximately 7,500 employees.

A week after the takeover, Musk revamped Twitter Blue, increasing its price to $8 per month and adding new features, including the “blue checkmark” verification that had previously been reserved for high-profile confirmed users. This plan was criticized by several outlets, fearing that the potential for misinformation would increase since anyone could pay to appear to be verified through Twitter Blue. Musk opted to delay the changes to blue checkmarks until after the 2022 midterm elections in the U.S. over these concerns, and stated that accounts that were faking identities, outside of parody accounts, would be terminated.

In case that’s not clear, Musk enabled the general public to buy ‘verification’ of real life identity. Jean Luc Picard doesn’t have enough palms for that one.

People then took a hatchet to Musk’s idiocy and arrogance,

The verified brand situation is getting out of control. Quick thread of twitter blue brands, and brands who might be pissed off at Elon right about now. pic.twitter.com/bZ9PSqZKtf

Here’s a sampling, but click through to the thread for the full experience. Roblox is a large US online gaming platform that has been criticised for how it exploits children,

AIPAC is a US pro-Israel lobby group,

6. Insulin should be free!! pic.twitter.com/XX7xJ7OOmm

You've now got new fake accounts spoofing the apology of the real account for the behavior of the other fake accounts. pic.twitter.com/xvgFQTn6zi

Thank you Elon, it has all been worth it for this. pic.twitter.com/yehQouh6rA

what's great about this one is that it's actually a fake screenshot (it's a fake reply from the real account to a fake tweet by a fake fake account), but there are enough actual fake accounts going on right now that this is no longer a distinction worth making 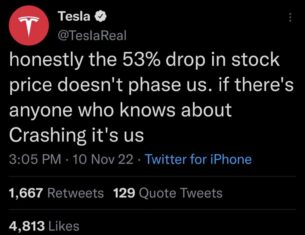 So far, so funny, the internets love taking the piss. More serious is the loss of trust, not so much of Musk (it’s a given), but of the platform itself,

Are you seeing far fewer bots/scams/spam?

god this is so dumb

Widespread verification will democratize journalism & empower the voice of the people

Twitter’s current lords & peasants system for who has or doesn’t have a blue checkmark is bullshit.

Power to the people! Blue for $8/month.

you get what you pay for

The underlying values there are libertarian capitalism: you can pay for the good stuff, or choose not to (in Musk’s world, everyone can afford $US8/month) and put up with a shitty experience. Your choice.

Expect twitter to shift from an ad-revenue, free social media platform with relatively equitable access, to a place of  class divisions. The most damage will be done to the culture, but many of us are philosophical about this because it’s been obvious for a long time that the tech giants are run by people without the social intelligence to do it well.

If you want social media for more than the laughs, shit posting, and politics, check out Mastodon. Lots of Kiwis over there now, different rules, different vibe. Mastodon is social media created by people who know what ethics are and understand that people want to relate with each other in human ways.