Like every other thing related to Trump recent events are both fascinating and disturbing.

From Tom McCarthy at the Guardian:

… the company took unprecedented action on Tuesday in response to lies tweeted by Trump about mail-in voting. Twitter added links to the Trump tweets inviting users to “get the facts about mail-in ballots”.

The company confirmed its decision was in keeping with its “civic integrity policy”, which bars users from “manipulating or interfering in elections or other civic processes”.

Trump falsely claimed that state secretaries of state were mailing ballots to every citizen, and that mail-in voting invited fraud. In fact, the secretaries in question, including Republicans, had only mailed out ballot applications – not the ballots themselves – and mail-in voting, which is common in 34 states and Washington DC, has not been vulnerable to fraud. Trump himself voted by mail in a primary this year in his home state of Florida.

Trump’s basic concern is that voting will be too easy.  The more Americans that vote the less likely it is that he will win.  This is why there has been such drastic suppression of black voters by Republicans for decades.  The right do better when only the wealthy and the privileged vote.

Trump’s response was typical.  The guy is the equivalent of a not very bright eight year old who is prone to throw temper tantrums if he does not get his way.

Again from the Guardian:

Twitter has for the first time taken action against a series of tweets by Donald Trump, labeling them with a warning sign and providing a link to further information.

Since ascending to the US presidency, Trump has used his Twitter account to threaten a world leader with war, amplify racist misinformation by British hate figures and, as recently as Tuesday morning, spread a lie about the 2001 death of a congressional aide in order to smear a cable news pundit. Throughout it all, Twitter has remained steadfast in its refusal to censor the head of state, even going so far as to write a new policy to allow itself to leave up tweets by “world leaders” that violate its rules.

The company’s decision on Tuesday afternoon to affix labels to a series of Trump tweets about California’s election planning is the result of a new policy debuted on 11 May. They were applied – hours after the tweets initially went out – because Trump’s tweets violated Twitter’s “civic integrity policy”, a company spokeswoman confirmed, which bars users from “manipulating or interfering in elections or other civic processes”, such as by posting misleading information that could dissuade people from participating in an election.

Trump responded on Tuesday evening with a pair of tweets that repeated his false claims about voting and accused Twitter of “interfering in the 2020 Presidential Election”. “Twitter is completely stifling FREE SPEECH, and I, as President, will not allow it to happen!” he wrote. Federal law protects the rights of internet platforms to moderate the third-party speech they publish.

Trump’s tweets include numerous false statements about California’s plan to expand access to voting by mail in November due to the coronavirus outbreak. The tweets now feature a light blue exclamation point icon, with the message “Get the facts about mail-in ballots”.

Then things went out of control after a black American, George Floyd, was arrested by police for forgery and then died while being restrained on the ground by a police officer with a knee on his neck.  He was restrained this way despite complaining that he could not breathe and despite video showing that at no stage did he resist or fail to follow instructions.  The police officer, Derek Chauvin, had his knee on Floyd’s neck while Floyd was lying prone on the ground for nine minutes.  For three of those minutes Floyd was non responsive.  Chauvin has been charged with third degree murder, which involves the intentional infliction of harm but where unintended death ensues.

Riots break out and the local police station and other buildings are torched.  The National Guard was sent in.  A black CNN reporter doing his job is arrested but before Chauvin was …

They arrested a CNN reporter before the police officers who killed George Floyd? Something is fundamentally broken in our justice system. https://t.co/mbZ0FV29YG

A nearby white reporter is not.

CNN reporter Omar Jimenez, who is black and Latino, and his team were arrested by officers early this morning in Minneapolis. Not far away, CNN journalist Josh Campbell, who is white, says he was "treated much differently." https://t.co/xmT2bRNQ5Y pic.twitter.com/ZVpbt2sI21

So what does Trump do?  Describe the rioters as very fine people the way that he described ultra right Charlottesville rioters?

Nope, he essentially calls for them to be shot. 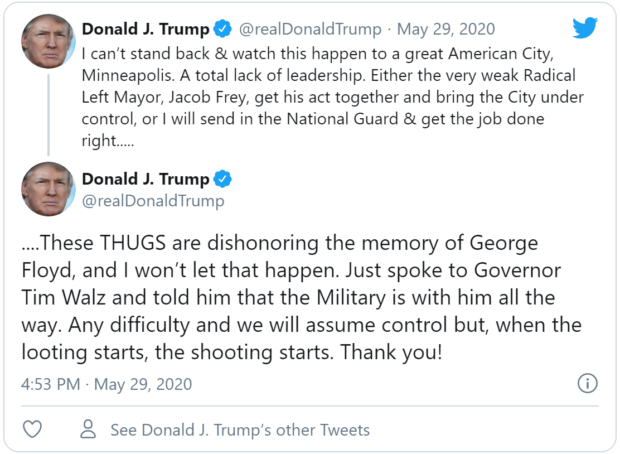 Fox is trying to spin it by suggesting Trump was referring to the possibility that third parties may take the law into their own hands and fire shots.  Whatever.

Twitter hid the tweet on the basis it was glorifying violence.  And as can be expected from an eight year old prone to tantrums Trump has blown up big time.

Because of the earlier tweets he has already tried to remove Twitter’s qualified privilege defence to defamation claims.  He does not seem to realise that if this occurs Twitter will have to review a whole lot more of his tweets.  He claims it is something to do with freedom of speech.  If he succeeds it will have a chilling effect on that right.

And this week America clocked over 100,000 Covid 19 deaths.  One cannot help but thinking Trump’s recent behaviour is at least in part an attempt to divert attention from that horrendous milestone.

America I hate to break this to you but you are officially screwed.