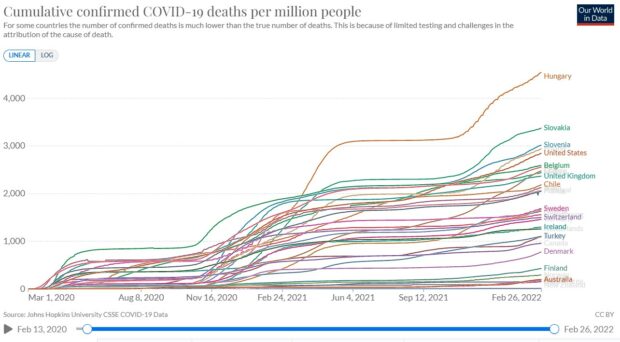 Yesterday marked the second anniversary of the first Covid case in New Zealand.

What a time it has been.

The initial sense of doom was strong.  I can recall waking up every morning and checking Johns Hopkins to see what the new infection numbers were.  Hearing about the initial wave that hit Italy.  How China was resolute and through suppression techniques that would not work in many Western nations managed to beat back the virus.  How Brazil, America and England butchered their responses through contempt for intellectualism and pandering to selfish stupidity.

I can also recall the feeling of euphoria after the first wave was seen off.  The sense of freedom as we lived mostly very normal lives as the rest of the world burned.  Sure we were not able to go on overseas trips or enjoy the comfort of a million overseas tourists but otherwise things were pretty good.

The country then saw off two more waves while millions died overseas.

Then Delta hit.  It had succeeded in devastating many health systems.  Ours coped.  Peak daily cases were over 200 in November 2001 and by January 18 the six month tally of cases had peaked 11,337 at with a then daily infection rate of 16.  Thanks to vaccination rates that were the envy of many countries in the world it seemed for a while that we could see Delta off as well.

Then it was Omicron’s turn.  Yesterday the six month tally of cases topped 100,000.  Today there were nearly 20,000 new cases.  Suddenly everyone has a member of their extended family, a work mate, a friend of a friend or a contact who has the virus.  Hospitalisations yesterday topped 300 but the number in ICU is still half of the Delta peak.  So far.

The Government has moved quickly to reopen the borders.  It became increasingly difficult to justify the restrictions given what was happening locally.  National will claim credit through using that tried and trusted technique of anticipating something that will inevitably happen in the future and then insisting that it happens quicker.

The mandate policy is holding but clearly will be reviewed in the near future.  Jacinda Ardern over the past few months has been saying precisely this.

There has been some conjecture that the recent High Court decision overruling the COVID-19 Public Health Response (Specified Work Vaccinations) Order 2021 would result in the end of mandates.  The order required police officers and military personnel to be vaccinated.  This case is not authority for the proposition that all aspects of the mandate policy are illegal.  The Judge made it clear that in his view the internal employment policies of Police and Defence, which already allows for vaccines to be mandated, should have been relied on and the order of itself, because its effects were limited, could not be justified.  He also said this:

I should make it clear what this case is not about. The Order being set aside in the present case was not implemented for the purposes of limiting the spread of COVID-19. Health advice was that such a further mandate was not needed for this purpose. Neither should the Court’s conclusion be understood to question the effectiveness and importance of vaccination. The evidence shows that vaccination significantly improves the prospects of avoiding serious illness and death, even with the Omicron variant. It confirms the importance of a booster dose given the waning effect of the first two doses of the vaccine.

The same Judge upheld the Customs Officer mandate but in that decision said:

Whether the challenged measure would remain demonstrably justified on the basis that it contributes to addressing the spread of the virus in circumstances when the virus is endemic in at least parts of New Zealand is an open question.

Clearly we are approaching that time where we will need to learn to live with the virus.  Some of us, myself included, would like to give lockdown one more go, particularly as cases skyrocket, just to get a hold on infections and dampen numbers down so that our system can cope and our doctors and nurses can be given a breather.  I don’t think this will happen however.

As a nation we have performed well.  We are better prepared and more resilient to the virus than any other nation.

Looking back the response has been world beating and we are in a better place than any other developed country in the handling of Covid.  Now we have to get ready and help each other through the most difficult battle yet.

And when this is finished we have to deal with climate change.  A once in a century health crisis is going to be a walk in the park compared to the ravages that climate change will inflict on us.