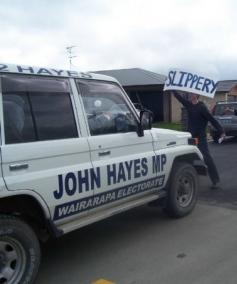 “Local activist James Sleep was today exercising his democratic right to protest when he was approached by an entourage of 4WDs carrying Wairapara MP John Hayes and John Key. Sleep attempted to get out of the way however he soon found himself being propelled backwards by the force of Hayes’ car. The car continued to accelerate for 20 metres until bystanders forced him to stop. Sleep described the incident as frightening and thought he was going to be run over. When the car stopped Sleep was aggressively tackled onto the ground by a male escorting Hayes.

Sleep has since laid complaints of assault and careless driving with the New Zealand Police.”

James Sleep is just a keen 17 year old participating in the democratic process and John Hayes put his life in danger. So what if he was in the way? It’s not OK to drive your vehicle into a human being. I don’t care how desperate for power you are or how heated an exchange gets, in our country resorting to violence over political differences is never acceptable.

John Key smiles and promises National will run a clean campaign yet National activist Cameron Slater launches disgusting attacks on every leftwinger whose name he can get hold of with National research unit help, the Nats launch vexatious EFA complaints against every leftwinger who dares voice opposition to them, gangs of young Nats have gone around Auckland destroying Labour Party hoardings, Tony Ryall has promised repercussions to DHBs that publicise good news, and threats have been made against a number of leftwing activists including myself by National’s bully-boys. All of this has now culminated in Hayes’ assault on Sleep.

I have just spoken to James and he is shaken but undaunted; the forces of established power have attempted to intimidate the Left into submission for generations but we will never be cowed by bullies, there is no question of that. No, the question is: will Key now show some leadership and punish those people who are making his promise of a clean campaign a lie? Will he force Hayes to resign for this unconscionable attack? This has gone too far.