Use of Teach First (NZ) illegal

National Ltd™s privatisation of public education hit a snag last week after some excellent work from the Post Primary Teachers Association. It took a case to the Employment Relations Authority which has now determined that the employment of Teach First (NZ)’s largely untrained “teachers” has been illegal all along.

As background for those who have not been paying attention, the privatisation of New Zealand’s education system has been quietly going on for several years now. Neoliberal legislation put up by the ACT Party is in place, dodgy-as educational achievements have been established, teachers and the profession put through the John Key Dirty Politics Machine, the Education Ministry reduced to an obsequious and craven retinue, the massive transfer of public funds to for-profit charter schools well underway, the recalcitrant Teachers Council replaced, and the primary legislation now in the process of reducing education itself from the status of a protected and cherished human right down to that of a commodity. All set for full-steam ahead. Seeking to stimulate “competition” in the education “market”, National Ltd™ has been using Teach First (NZ) to recruit these so-called “teachers”, particularly for charter schools,  since at least 2010. To date, Teach First (NZ) has received millions of public education dollars which have been spent infesting at least 18 schools with around 50 of its unwitting clockwork neoliberal droogs.

Now, thankfully, up pops the brave PPTA and ERA ruling. The timing of the determination is a bit cute, but at least there’s a chance now for the privatisation agenda to be made abundantly apparent to anyone who might care.

Teach First (NZ) is the local branch of international neoliberal front group Teach For All which presents to the world as a “leadership” and “educational” initiative. Its marketing is all very touchy-feely and about working towards making the world a better place by putting bright, carefully-selected future leaders in front of impoverished classrooms, yadda yadda yadda. Yet, the US branch, Teach For America, has become a hundreds-of-millions-of-dollars a year political juggernaut for privatisation. Teach For All is the ideological mothership for dozens of such privatisation operations going on internationally. It receives considerable funding from a variety of corporations, and investment banks who are telling their clients to get in while they can. One of its largest funders is the New York based Robertson Foundation. Headed up by Cardinal of the Cult of Neoliberal Economics, New Zealander John Hood, the Robertson Foundation has among its “visions” the reform of public education. In this area, it adopts a two pronged approach:

Don’t you love how, when it comes to privatisation, its always about “choice”?

The Teach For All’s global conference was held in New Zealand in October. John Hood was idolised wherever he went, attended to dutifully by Teach For All’s CEO, the conflicted Wendy Kopp. Dozens of converts to the Teach For All philosophy flew in from around the world to share their visions, spread the word, celebrate their individual wonderfulness, and relish the New Zealand experience. Sadly, among the scheduled featured speakers at the conference was charter-school supporter and Labour MP Kelvin Davis. 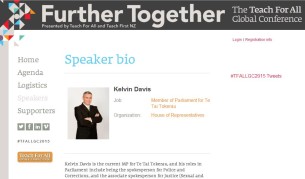 Not a good look.

After his bollocking earlier this year for helping raise money for a charter school, it does seem unlikely that Davis would actually have shown up.  Still, it might be time to re-explain to him, using small words spoken slowly, that the privatisation of public education does not fit into any decent values system, and even being seen to support such a notion is not a good look. Labour might also take the time to have a word with its Mangere MP Su’a William Sio about his LEC’s connection to the Rise Up Trust’s charter school. Its tenuous but ripe for a John Key Dirty Politics Machine spin cycle.

Where to now for National Ltd™? You gotta give a wry chuckle: of all the things it got wrong it was to check to see if what it was doing was actually legal. You expect that in a money-trading boiler room but not in a government and the obvious conclusion is that National Ltd™ doesn’t know the difference. But, alas, the illegality is just a hiccup.

Already, its besties in the MSM have started spinning the Employment Relations Authority’s finding quoting howls of angst from various neoliberal cultists scattered through the education system. The MSM has already been seeded with recent stories about how hard it is to find good teachers and to staff rural schools. Scant mention is made of the way the teaching profession has been treated and the utter contempt National Ltd™ has always shown for it. The John Key Dirty Politics Machine operative, David Farrar, is spining that the real issue us that Teach First (NZ) recruits are non-union members. Farrar, the MSM, and National Ltd™ avoid pointing out the ferocious anti-union ideology of Teach First (NZ)’s  over-arching body and the fact that Teach First (NZ) recruits are all carefully selected for ideological purity and/or youthful naivety. All this spin is helping set up a TINA excuse for National Ltd™. Currently,  the Ministry of Education is saying “the door is always open” and pretending it wants the PPTA to engage quickly to resolve the situation. Its a set up. The PPTA can’t make this go away because the current situation is in breach of law; it flaunts the secondary school collective agreement and the State Sector Act.

While the PPTA is being lined up for blame, Hekia Parata will, again, blame her officials and give them a jolly good thrashing before demanding they waste yet more education money filing appeals left right and centre. If that doesn’t work, we will see another jack-booting of democracy as a legislative fix is stomped through the debating chamber or the Governor-General is told to tweak some regulation somewhere. Because, well, shucks, everyone was acting in good faith and, at the end of the day, this is going to hurt the children and, you know, National Ltd™ is all about helping the children, especially Maori children, right? 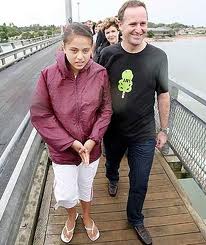