Waking up to the realities of neoliberalism and austerity

Even the IMF now acknowledges the downsides of neoliberal economics and government austerity policies. In a significant new report IMF economists write:

Instead of delivering growth, some neoliberal policies have increased inequality, in turn jeopardizing durable expansion
…
There has been a strong and widespread global trend toward neoliberalism since the 1980s
…
There is much to cheer in the neoliberal agenda. The expansion of global trade has rescued millions from abject poverty. Foreign direct investment has often been a way to transfer technology and know-how to developing economies. Privatization of state-owned enterprises has in many instances led to more efficient provision of services and lowered the fiscal burden on governments.­

However, there are aspects of the neoliberal agenda that have not delivered as expected. Our assessment of the agenda is confined to the effects of two policies: removing restrictions on the movement of capital across a country’s borders (so-called capital account liberalization); and fiscal consolidation, sometimes called “austerity,” which is shorthand for policies to reduce fiscal deficits and debt levels. An assessment of these specific policies (rather than the broad neoliberal agenda) reaches three disquieting conclusions:

•The benefits in terms of increased growth seem fairly difficult to establish when looking at a broad group of countries.­

•The costs in terms of increased inequality are prominent. Such costs epitomize the trade-off between the growth and equity effects of some aspects of the neoliberal agenda.­

•Increased inequality in turn hurts the level and sustainability of growth. Even if growth is the sole or main purpose of the neoliberal agenda, advocates of that agenda still need to pay attention to the distributional effects.­ …

When the benefits of increased growth are “difficult to establish” and the costs are “prominent” the policy has failed. Not to mention the fact that eternal growth is the wrong (and an impossible) goal anyway. Coverage in The Guardian:

A strong warning that austerity policies can do more harm than good has been delivered by economists from the International Monetary Fund, in a critique of the neoliberal doctrine that has dominated economics for the past three decades. In an article seized on by the shadow chancellor, John McDonnell, the IMF economists said rising inequality was bad for growth and that governments should use controls to cope with destabilising capital flows.
…
McDonnell said: “The International Monetary Fund has summarised what a growing consensus among economists across the globe now think, that Osborne-style austerity economics increases inequality and instability, and undermines growth. …

You’re witnessing the death of neoliberalism – from within
….
You hear it [the death of the ideology] when the Bank of England’s Mark Carney sounds the alarm about “a low-growth, low-inflation, low-interest-rate equilibrium”. Or when the Bank of International Settlements, the central bank’s central bank, warns that “the global economy seems unable to return to sustainable and balanced growth”. And you saw it most clearly last Thursday from the IMF.

What makes the fund’s intervention so remarkable is not what is being said – but who is saying it and just how bluntly. In the IMF’s flagship publication, three of its top economists have written an essay titled “Neoliberalism: Oversold?”.

The very headline delivers a jolt. For so long mainstream economists and policymakers have denied the very existence of such a thing as neoliberalism, dismissing it as an insult invented by gap-toothed malcontents who understand neither economics nor capitalism. Now here comes the IMF, describing how a “neoliberal agenda” has spread across the globe in the past 30 years.
…
The results, the IMF researchers concede, have been terrible. Neoliberalism hasn’t delivered economic growth – it has only made a few people a lot better off. It causes epic crashes that leave behind human wreckage and cost billions to clean up, a finding with which most residents of food bank Britain would agree. And while George Osborne might justify austerity as “fixing the roof while the sun is shining”, the fund team defines it as “curbing the size of the state … another aspect of the neoliberal agenda”. And, they say, its costs “could be large – much larger than the benefit”.
…
From the 1980s the policymaking elite has waved away the notion that they were acting ideologically – merely doing “what works”. But you can only get away with that claim if what you’re doing is actually working. Since the crash, central bankers, politicians and TV correspondents have tried to reassure the public that this wheeze or those billions would do the trick and put the economy right again. They have riffled through every page in the textbook and beyond – bank bailouts, spending cuts, wage freezes, pumping billions into financial markets – and still growth remains anaemic.

And the longer the slump goes on, the more the public tumbles to the fact that not only has growth been feebler, but ordinary workers have enjoyed much less of its benefits. Last year the rich countries’ thinktank, the OECD, made a remarkable concession. It acknowledged that the share of UK economic growth enjoyed by workers is now at its lowest since the second world war. Even more remarkably, it said the same or worse applied to workers across the capitalist west.
…
Economists don’t talk like novelists, more’s the pity, but what you’re witnessing amid all the graphs and technical language is the start of the long death of an ideology.

Here in NZ we are experiencing the slowest recovery from a recession in over 50 years, and (as Labour reminded us recently) the share of wealth going to workers is decreasing under National. Another data point confirming the failure of this ideology.

We need radical new ideas, and it is up to a Labour Green government to deliver them. 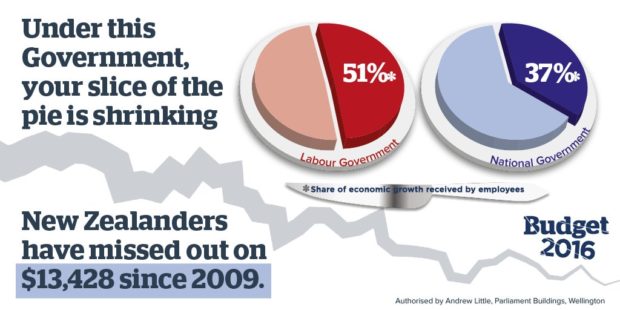