What does President Obama mean for you? 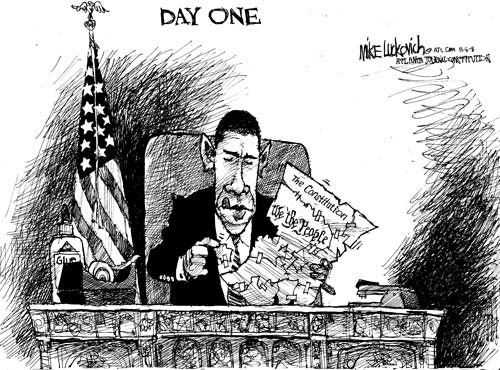 If you’re living in New Zealand, President Obama isn’t going to change your life. Remember, you voted for John Key. You’ll have to wait for that ray of hope to shine. But President Obama won’t go un-noticed here, because his presidency means at least four things for New Zealanders.

First: President Obama means you can feel slightly better in the knowledge that fewer children of the world are being maimed or killed. Yes, in charge of the world’s most powerful state, Obama means a more liberal and internationalist ideology will dominate international affairs. It means less war, fewer deaths, more humanitarianism, and more diplomacy.

Second: President Obama means you won’t have to abandon your family bach/crib on the coast. Thankfully Obama’s environmental policies aren’t written by the oil industry (or pre-written in Genesis). So hopefully now, the world can work with the world’s largest emitter to finally make some meaningful progress on combating climate change.

Third: President Obama means you’ve got a better chance of keeping your job in the tourist or agriculture industry. Taking a more ‘interventionist’ approach to the U.S. economy will help minimise the effects of their recessions. And if the American economy is in better shape, Americans will remain huge buyers of our animal products and keep visiting New Zealand in droves (In 2007 more than 216,000 U.S. citizens visited NZ).

Fourth: President Obama represents to us the power of people. He took the helm of a movement of people that defied the conservative institutions of the United States. President Obama tells us as New Zealanders that we don’t have to settle for the mediocrity and moral ambiguity that won out in our last election. A strong, inspirational and successful left-wing movement is possible because people are intelligent and people are moral. Talk, explain, debate, inspire, and people will see the neo-conservative institutions for they really are – there to suffocate the interests of the people.

46 comments on “What does President Obama mean for you? ”