What the feck Greens 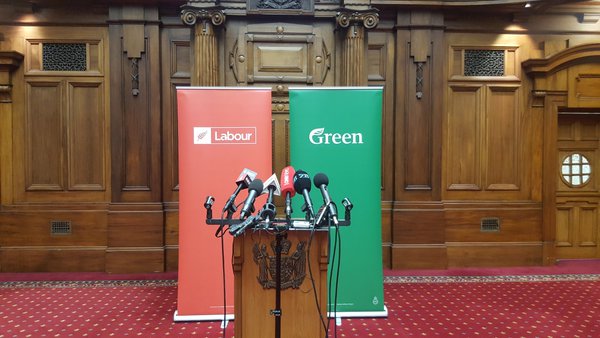 It appears the Labour Green Memorandum of Understanding did not work as well this week as it was intended.  The Greens decided to vote for National’s tax reduction legislation while Labour voted against it.

I am struggling to understand why the Greens did this.  This budget does nothing beneficial for the environment.  It promises more irrigation allowing more dairying and more polluted streams with a miniscule amount set aside to address the consequences.  It does not address New Zealand’s response to climate change.  Putting to one side the environmental devastation that will be caused it does not address how we as a country are going to address the $14 billion hole in our finances that the payments required under the Paris Accord will cause.  And the home insulation scheme is being cut, completely.

But they chose to support the Government’s tax reduction law.  And in the process brought back memories of 2011 and 2014 when late during both campaigns the Greens dropped hints that they could go into Government with National in the dying stages of each campaign.  Labour and Green support then dipped.

You have to wonder what was going through the collective Green caucus mind as it decided to support the Government’s proposal.  There were plenty of reasons for it to oppose.  For instance the bottom 50% of wage earners receive only 20% of the money from the tax cuts.  The 500,000 low income workers who currently receive the Independent Earners’ Tax Credit receive an extra $1 per week.  The richest families receive $35 per week and the poorest families only $5 per week.  The increase in accommodation supplements will almost inevitable lead to rental inflation and will be a payout to landlords, not tenants.  And in health, education and policing previous cuts are not addressed.

While I have no problems with benefits being increased the Government’s proposal will lead to increasing inequality and do precious little for those in most need.

And the Greens understood this.  Meturia Turei for instance said this in Parliament:

This bill delivers tax cuts, which the country has said it does not want. Actually, what the country wanted was to see more money being delivered in services, in particular, and to the families who need it most. What we see with this legislation is a very meagre opportunity to provide additional funding to the families who need it the most, and the maximum benefit going to those who earn the most.

That is pretty traditional National. We know that. We saw that when it first came in. After the 2008 election, its first choice then, in response to the global financial crisis, was to give significant tax cuts to the very wealthy, and we are seeing that now as part of its attempt to try to win a fourth term at this year’s election. Nobody is fooled by this. Everybody can see that that is what National is doing—that it has been, over the last 8 years, systematically eroding Working for Families, systematically eroding social services, education services, and health services.

Now it is crowing about delivering a tiny proportion of what it took from New Zealanders over that period of time, and it is trying to sell it as being a great advantage for working families when, in fact, working families will still continue to suffer from the effects of increased poverty, increased housing costs, and increased costs of living as a result of National’s policy. I just want to demonstrate some of that here. As you know, those on the lowest incomes will be getting around $5 a week extra from the tax cuts from this—

METIRIA TUREI: Ha, ha! Five dollars a week extra, right? That is what they are going to be getting. That is what they will be getting. Let us just have a think about what that means, because one of the arguments in the legislation is that the Government is delivering this meagre little tax cut to the low-income earners because of high house prices. Right? That is how it is justifying it. Its members talk at length about the accommodation supplement as being one of the measures in this—it is not in the provisions of the bill, but it is in the description of the bill.

To be fair to the Greens part of the problem is the rushed nature of the Budget debate where a huge amount of information gets dumped in a short period of time and the opposition parties are meant to somehow deal with this and make quick decisions with limited amount of time to comprehend.

But I am somewhat flummoxed by the decision of the Greens to support the benefit changes.  They could have adopted a principled stance and opposed the bill.  Instead of this they have supported something that is designed for PR purposes and not the alleviation of poverty.  And they have provided the Government with publicity that it will roll out continuously until the next election.

It is not that often that Labour adopts a principled position and the Greens don’t.  And the incident is messy in that the parties look divided on an important issue.  Hopefully this is not a situation that will continue.