Accepted truths are funny things. For example, everyone has just accepted that the local government mergers in 1989 saved money and that costs are out of control now. From these premises, it flows that the further merger of Auckland’s councils into a supercity will save some of these unacceptably high costs.

I for one hadn’t thought to question these facts until the other day someone asked in one of our threads if the last round mergers really had saved money. Fortuitously, StatsNZ has a series including local government administration costs from 1972 to 2005: 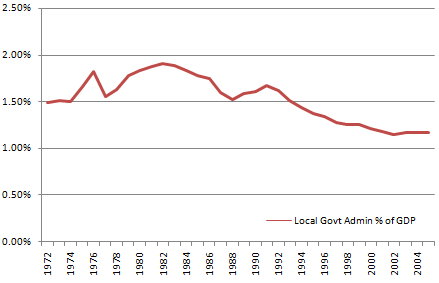 My look at what the graph tells us is this: local government costs were decreasing anyway before the last mergers were forced by central government. In fact, the expense of the mergers pushed the cost of local government up for several years after 1989. Cost reductions did resume in the early 1990s but they follow a track that was in place before the mergers. Did the government forcing local bodies to merge really save money? Hard to say but it’s certainly not clear they did. There’s no drop unambiguously associated with the mergers. (It’s worth remembering some savings in administration costs can be illusionary if a council turns its water department into a wholly-owned company, the cost of administrating the water supply instead becomes a cost of purchasing services.)

The other thing to note is that the cost of administration of local government is low, much lower than it used to be, and not increasing. So it makes one start to wonder where this sudden supposed crisis in Auckland local government is. It’s not in the cost of administration, it’s not in transport planning because there’s already a unitary body for that, and it’s not water, which also has a unitary body already.

If not cost savings and coordinated planning that is happening already, what exactly is a supercity going to provide?
-Marty G