When will oil peak?

We’ve seen that oil production in oil fields and countries peaks long before the oil actually runs out, and as individual countries go, so must, inevitably go the world. Once the amount of oil the world is capable of producing starts to fall, things are going to get difficult. Our economy is the use of energy to shape the natural world into more ‘useful’ forms – less energy from oil is going to hurt our economies (and finding the energy from elsewhere will not be easy, as we’ll see). But when will the peak happen?

Estimates vary. The father of peak oil, Marion Hubbert, used four models to predict the peak of US oil production. They’re a bit complicated but you can read about them online. He came up with a set of peak years for the US – 1965, 1967, 1969, 1970. It peaked in 1970. Using these models for world production, researchers have produced dates from as early as 2005 to as late as 2018. These are not just random estimates from random people. Here’s a short list of peak estimates from authoritative sources:

We won’t actually know when oil has peaked until some years later. Right now, we know oil production is falling from an all-time high in July but it is impossible to say whether this is the underlying, geologically inevitable peak or the consequences of the super-spike in oil prices we saw this year. Ultimately, the actual peak date doesn’t matter because economics and politics take charge.

Here’s how David Strahan describes the economics of approaching the peak in his 2006 ‘The Last Oil Shock’:

If oil ever strays any distance into its ‘real’ price range it cannot stay there long because of the economic havoc it would wreak. Rising energy prices stoke both inflation and recession, so the last oil shock may mean a return to the stagflation of the 1970s, only very much worse. Soaring costs, bankruptcies, and unemployment would lead to economic slump and collapsing demand for petroleum. The oil price would then subside but, given the reason, this would be no consolation. If the economy and oil demand were to recover once more, they would soon hit the oil supply ceiling again, which would be falling all the while. The process could happen many times over or simply smear into an extended depression.

And this is exactly what we have seen over the last few years. Oil prices broke record upon record from 2004 on and this sharp increase then turned into a super-spike when speculative moneymen saw the underlying tightness of supply and high demand. The price just kept going up and up until the world economy broke (I’ll look at the relationship between the oil shock and the sub-prime crisis, now credit crisis, in the next post). We’re going to see this cycle continue. 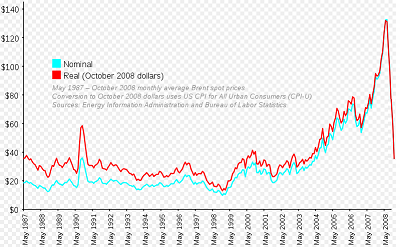 Another important factor to consider is that it is not in the interests of oil-producing nations to produce as fast as they can. While the Western oil companies, driven by the need for immediate profit, have always pumped as much as possible, and have seen their output peak, state-run oil producers in the Middle East and elsewhere have aimed for maximum value over time. Basically, it’s not in Saudi Arabia’s best interests to pump all it can now to keep prices down only to see its production capacity collapse sharply later. So, the Saudis, despite record oil prices this year, were not pumping full-tilt – they’re happy to keep their oil reserves for later spikes. The effect for the world will be an earlier peak at a lower level.

Also, the peak and its approach will see countries scramble to secure their own supplies. Exporters will be sure to make sure they have oil for their domestic demand first, reducing amount of oil available on the export market. Powers like China and the US have been pursuing their respective merchantalist and military-led strategies to get friendly governments in charge in oil-exporting nations, guaranteeing their preference for supply. All of which doesn’t bode well for a small, oil-importing country isolated in the South Pacific.

We won’t wake up one day to find there isn’t enough petrol for the car. Instead, there will be what the British Chief Scientist called a “corrugated plateau” in production, output falling but bumping up when the global economy recovers only to be hammered again by another price super-spike. But that doesn’t make things better. It can make things worse. Like the frog in a gradually heating pot of water, humans are very poor at dealing with problems that emerge slowly and require counter-measures to be taken long before crisis strikes. We see a super-spike end and relatively low prices return and our tendency is to think ‘problem solved’ even though it is merely a temporary respite, caused by oil prices sparking a global recession. That may lull us into not taking the mitigating actions needed, even as oil production falls. Before we know it, the oil will be running short and we won’t be prepared.

Even if we act now it is too late to avoid any pain. As the US Department of Energy concluded:

“The world has never faced a problem like this before. Without massive mitigation more than a decade before the fact, the problem will be pervasive and will not be temporary. Previous energy transitions (wood to coal, coal to oil) were gradual and evolutionary; oil peaking will be abrupt and revolutionary”.

We can walk into this blindly, or we can get to work now and do what we can to prepare.