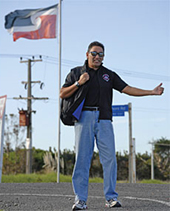 Heard an interesting piece of gossip last night. Word has it Hone Harawira’s gone awol from the Maori Party.

Apparently he’s somewhere in Australia, buzz around the traps is he’s pissed off about the increasingly right-wing direction Tariana Turia is taking the Maori Party in and is thinking about quitting. The last straw was said to be the Rugby World Cup humiliation and the decision to back the privatisation of ACC.

Quitting wouldn’t be entirely out of the blue for Hone. His mum, Titewhai Harawira, is regularly on Radio Waatea criticising the government and the Maori Party’s role in it, though I’m not sure he’s quite at that point yet.

If he did go it would be a major blow for the Maori Party, not just in terms of its public image, but in the number of activists from the left of the party Hone would undoubtedly take with him.