It’s not news that NZ’s water supply is degrading. Pollution is increasing, demand is increasing and supply will become more variable with climate change. Back in January:

Urgent need to act on our water supply
…
Despite the weekend’s deluge in the north, summer is barely a month old and already some regions are running low on drinking water. Supplies for farm animals and crops are being rationed.

Trucks are delivering water to parched vineyards in Marlborough. As river levels dip in the hottest months, water quality falls. Warning signs beside freshwater lagoons at Piha, Karekare and Bethells because of overloaded septic tanks are a familiar summer sight.

Toxic algae has been detected at 15 freshwater sites in Canterbury. North of Christchurch, people who draw water from rural supplies with shallow intakes must permanently boil water used for drinking, oral hygiene and food preparation.

The pattern is repeated most years. In all likelihood, the task of ensuring towns and cities – and the countryside – have access to clean and sufficient water, as well as water for recreation, is certain to become a pressing issue. It begs questions whether communities are adequately prepared to cope with water supply stresses, and whether agencies which manage fresh water are on top of their game.

The signs are not positive. …

New Zealanders are witnessing the greatest theft in our country’s history. Our freshwater is being taken away from us.

While one generation watches as progress and growth is unashamedly used to justify the exploitation of our waterways, another waits to inherit toxic freshwater that is off limits to humans and wildlife.

This crisis has been growing for decades and when we’re told that nothing can be done or that there is no problem, we become jaded. …

The Nats are (supposedly) aiming for a “wadeable” water standard. 12,000 people signed a petition calling for a swimmable standard. Naturally:

The Government has shut the door on the 12,000 people who have signed a petition calling for a requirement for our fresh waterways to be “swimmable” at the very least.

The Minister for the Environment Nick Smith says it’s “not realistic nor achievable” for the Government to legislate that all freshwater in lakes, rivers, streams, groundwater, wetlands and estuaries, be “swimmable” rather than “wadeable”, as is currently the case.

Yet the Labour Party is committing to making “swimmable” the minimum standard if it was to be elected into power. …

The New Zealand Recreation Association (NZRA) has expressed concern about a consultation document that sets out the government’s proposals to improve the management of fresh water, saying the document doesn’t go far enough.
…
Mr Newton said NZRA does not support the Government’s contention that returning already polluted rivers to a swimmable state is impractical or unaffordable. “The Government is proposing that there be a ‘wadeable’ standard of water quality. This is not good enough. Freshwater bodies should be swimmable where possible.”

He said there is a national interest in conservation of freshwater areas, in terms of the value of tourism, biodiversity and recreation. Therefore, a greater share than the 50 per cent proposed in the document should be made available from central government when projects reflect regional gains of national significance. …

It’s not just the surface pollution (like Canterbury’s Lake Forsyth, so poisonous that it is killing sheep and other animals) that is the issue. We have a much more fundamental long term problem:

Scientists warn NZ aquifers are being poisoned by farming

Scientists are warning that our aquifers, the reserves of water under New Zealand’s land surface, are being poisoned by intensive farming.

Although some aquifers are already contaminated, they say the worst is yet to hit because pollutants like nitrate, can take decades to get down to the drinking supply.

But much of the nitrate in underground water now is from farming 30 or 40 years ago, which pre-dates dairy conversions. Dr Webster-Brown says with the dairy industry now using nitrogen, levels will rise distinctly.

Outstanding. Oh and by the way, that big export market that we are always courting has already noticed:

NZ water sent back from China

Hawke’s Bay’s drinking water is not good enough for China, with a shipment of NZ Miracle Water sent back to New Zealand. … “Unfortunately the levels of nitrite were higher than the Chinese standard hence the product was returned.” …

We’ve already locked in an increase in aquifer / supply contamination, but the only sane thing to do is cut back on intensive farming methods immediately. What kind of idiot country screws up its own water supply? 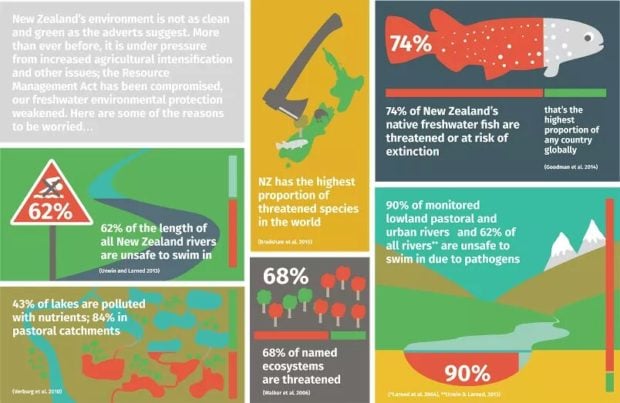 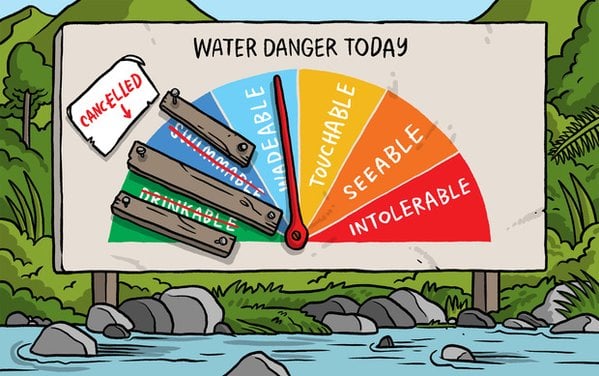 46 comments on “Who needs water anyway ”