Why Hillary is the only candidate to beat Donald Trump 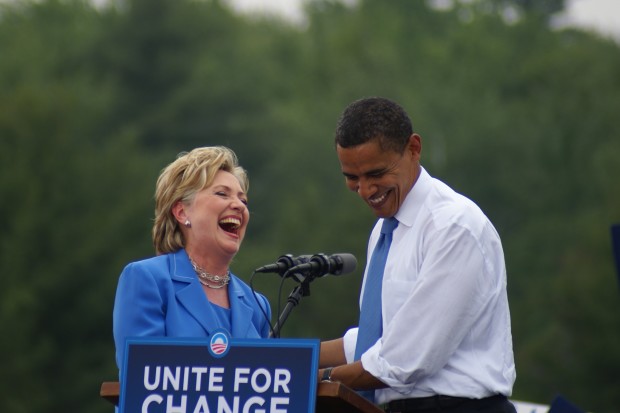 First off, congratulations all you ex-Sanders supporters. Super Tuesday means you have officially put the bong down.

You know Sanders would have been a terrible match against Trump. In your heart. Come on. It would have been Oral Roberts versus Bishop Brian Tamaki. Stone Cold Steve Austin versus Rocky. The Yandall Sisters versus The Nolans (look them up kids). You can’t have zero difference in style if you want to get picked off the supermarket shelf. Best to keep Sanders’ virtue unsullied for the Futures We Should Have Had debates. Sanders would have been the perfect post GFC 2008 candidate: hate the rich, blame the banks, close the world, melt the tanks. There was only one good moment for a guy like him, and it wasn’t 2016. Just a really bad case of it’s wrong to be right too late. Bummer dude.

Now. Why Hillary? First off, she’s dirty. And I don’t mean Bill dirty. Good dirty. We’ve seen what Mr Constitutional Expert Obama achieved. Quite a lot, actually. Imagine what he could have done with actual governance experience. Right to the end, he got owned and outplayed by the Republicans and by an intransigent CIA and NSA. Hillary knows who the enemy is within and without. So do they. She’s dirty, because she fights. Much of politics is getting knocked down hard and standing up again. Now, I’m a whole bunch more an LBJ fan than a Kennedy person; she’s like LBJ because she will have written her Transition Plan already, marshall internal troops, figured the precise policy gain for the least political cost, and be seen to win. The dirt under her nails is called experience.

Secondly, she’s going to keep gearing the military up. The Deep State gets to surface again. No more Obama-esque withdrawal from the world to leave it all to the Taleban, the terrorists, and the tyrants. You could try and blame the last 15 years on Hilary Clinton. Keep trying. What? You want a different world? Call the UN. Call the Pope in Rome. Call your next of kin, ’cause your ass is gone. Plenty of moisties will replay history into some pretend-extend Gore version of the future. Hilary Clinton will play to the national interests, incomprehensible though they are to us. Trump would not know one end of the military from the other.

Next, very importantly, she knows how to get paid. In any world I know of, if you want some money, you go to the bank, and you ask. That’s what Bill did, that’s what Hillary does. No more super-democratised ten cents a shot nonsense. Until some future Supreme Court overturns the right to have Super PACs, you go to the bank, and you ask. No more inflated hopes about CEO prosecutions come the next crisis. Just deals. With banks. To be clear, If Sanders had won, and if he’s built a popular political movement so big that the Koch Brothers quaked, and if he’d cleared at least three Supreme Court judges, and if he’d built the political will for the biggest upheaval since the New Deal, I’d have been there. Except, he didn’t. So this is where I am.

Let me introduce you to www.hillaryclinton.com

She’s going to cut taxes for businesses that share profits with their employees.

She’s going to ensure that students don’t have to borrow to go to a college in their state.
(stealing being a sincere form of flattery, etc)

She’s going to enact the “Buffett Rule” so that millionaires can’t pay less tax than their secretaries.
Prepare to be soaked, one-percenters.

She has an actual plan to combat racial injustice.

For her, this means ending the era of mass incarceration, unwinding stupidly punitive schools, and defending the right of absolutely everyone to vote.

She has a plan for immigrants to have a path to full and equal citizenship. Something she could teach the Australians, on our behalf.

Now, click if you dare, but have a look at this:

Not much policy except tax and immigration. But a great endorsement from the Chairman of NASCAR!

That is to say, she’s been better at policy than anyone standing for quite some time.

She’s going to be the sane one. The one you knew was boring, but right, all along. Don’t you just hate sensible aunties in Fords? Wouldn’t you rather get a double with no helmet on your fat uncle’s Harley Davidson? What are you, seven?

Now, to argue against myself from a few days ago, she’s no populist. You won’t hear her call America “rigged”, you won’t hear her call Muslims or 1 per centers evil. A President, like a Prime Minister, has to run the whole country. Not just the bits that like you. You won’t hear extemporaneous, free-wheeling put-downs like the extremes of left or right do. But Democrats already know from Howard Dean that they will always get treated a whole bit different whenever they holler like professional Louisiana hog-callers. Not saying it’s fair. Hillary, sigh, will campaign in prose, and govern in prose.

We’re going to get the only Democrat capable of returning America away from the scourge of radicalism, from the irrationality of lunatics without plans left and right. That’s not a Better Than Nothing argument, in a Kennedy V Goldwater sense. Sure, you didn’t get the Mad Professor from Back to the Future. But you didn’t get the Orange King Kong either. That’s a Bank It argument.

Hillary Clinton is already setting herself to be a whole bunch more leftie than Obama. She has a very simple premise: build on the good Obama has gained you. And defy their hatred, their rage, their savagery, with good, honest politics.

There you go, and I didn’t even mention being a woman once.