Why no punishment for Westpac?

You would have seen that Westpac was found to have undertaken the largest theft of tax money in New Zealand history. From 1998 to 2002, they hid $586 million in tax due to our government. Add about 6% interest a year and the total they owe us is $961 million.

My problem is that the judgment at present would only see us get back that the tax they owe plus that relatively low amount of interest. Oh and court costs. Where’s the punishment for an intentional plan to rip us off for as much as possible?

This was no accident, it was an intentional crime against all of us, against our country. The bastards even calculated how much tax they would need to pay to deflect IRD from uncovering the theft of all the rest. And what have we done? We’ve said ‘ohh, you cheeky beggars! You nearly got away with it there, now give us the money back and run along you wee scamps’.

IRD can charge penalty tax on top of the money due thanks to this judgment and it had better. Otherwise Westpac will have faced no consequence for its theft. In fact, as things stand it has probably made millions by investing that money at a higher interest rate than IRD is charging it.

In reality, the business should be seized by the government. Westpac undertook the most expensive criminal action in New Zealand history, I don’t see how we can’t consider it a criminal organisation and its assets, therefore to be forfeit. Westpac’s owners don’t deserve the right to own the business with which they tried to rip us off. We should take the bank’s business over and run it ourselves, combine it with Kiwibank. 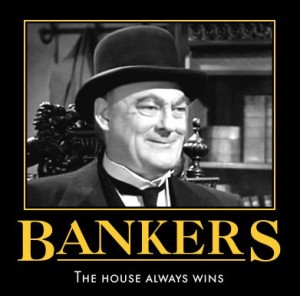 If you or I stole a fraction of this amount from the government we would be locked up and rightly so. But we don’t live in a world where justice applies to business. All Westpac has got is an order to give back what it stole and not do it again, pretty please.

At the very least, the Government should stop banking with Westpac. Transfer over to Kiwibank instead. It’s bad enough that we allow New Zealand’s biggest criminal organisation to continue operating, but our government certainly shouldn’t be their customer.

80 comments on “Why no punishment for Westpac? ”