Why the Right is worried 4: Polls

Those numbers suggest that 240,000 voters have shifted from Right to Left in the past year. The trend is quite clear now. The Right’s support peaked last year and the gap has been gradually closing ever since. A further 66,000, 2.5%, and the two sides are equal. As the economy falters and communities around the country see the mandates they’ve just given the new Left mayors around the country frustrated by National, expect to see those numbers shift Left more.

On current trends, Left could pass Right as soon as February (really early election anyone?): 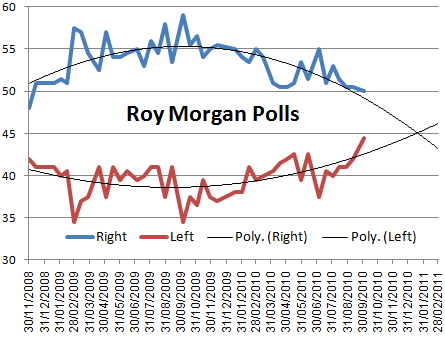 Despite this, media reports continue to be laced with references to Labour’s inability to win and being ‘stuck in the doldrums’. That’s just dinosaur thinking from some journos who still think that the biggest party governs, not the biggest coalition.

It’s vital for the Right that Labour be written-off in the minds of the public. The risk for the Right is that you begin to believe your own spin and they’ll be caught with their pants down the day that the Left polls higher than the Right.