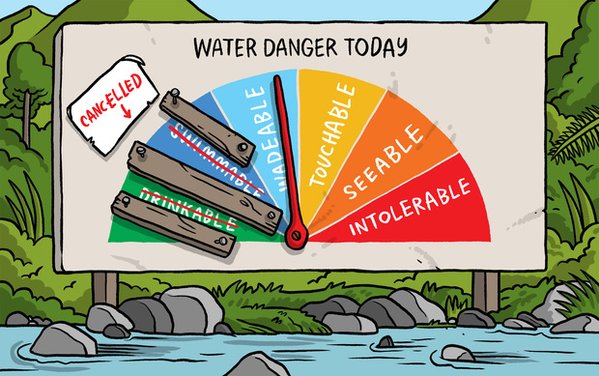 If you’re out there in ZB land and believe that water management should be democratically elected, you won’t find respite here.

The 3 waters are stormwater, drinking water, and wastewater. About 85% of this is currently managed by Councils. Of all those who do a generally good job, Auckland’s Watercare is the exemplar. But stormwater in Auckland has led to the near-death of the entire Hauraki Gulf inside a decade, and last year they failed to plan for water shortages so much they had to fire the Chief Executive and replace the Board.

Watercare is well and truly the best example, and they are a failure. I didn’t need to mention Wellington Water’s utterly disgusting co-managed mess or Dunedin Council’s poisoning-by-neglect since they are utter disasters far far worse than the current best. Water management needs a comprehensive change in New Zealand.

As reported by RNZ:

About 8000 people were infected by campylobacter contamination centred in Havelock North in 2016, leaving at least four dead and others permanently disabled, leaving thousands sick and costing the local health board more than $760,000.

This prompted the government to take a long, hard look at water services and how they were being delivered across New Zealand, the result being a proposed programme of reform which would see water management taken from New Zealand’s 67 councils, and handed to four big regional entities.

In recent years too, Wellington has seen sewage bubbling up in the streets, and in Auckland storms have regularly led to beach closures due to sewage overflows. Drinking water supplies across New Zealand are inconsistently managed and often needs boiling.

Local Government Minister Nanaia Mahuta said it was unacceptable that every year about 34,000 people in New Zealand fell ill from drinking water, and thousands of households were required to boil their water to drink it safely.

Reports from the Water Industry Commission for Scotland, reviewed by engineering firm Beca, suggest between $120 billion and $185 billion is needed over the next 30-40 years to get water systems across the country up to standard.

The people that caused the issue in the first place, the Hawkes Bay Councils, admitted in September 2020 that they had done such a poor job of investing in the system that overwhelming rates bills and crippling debt would occur if the water problems were not fixed.

Last year a new independent water regulator, Taumata Arowai, was established. And Minister Mahuta released the model for four entities to regulate it all.

Lots of councils oppose it. To sweeten it, the government offered councils $2.5bn to opt into the reforms, aiming to leave no council worse off from the reforms and ensure consensus.

In September 2021 the Water Services Bill passed, handing drinking water regulation from Ministry of Health to Taumata Arowai and strengthening drinking water regulations, including with increased penalties. Most councils appear to be against the reforms going ahead. Dunedin Council recently decided to take is mana whenua relationship seriously rather than follow the masses.

Suppliers already registered with the Ministry of Health – mostly councils – have a year to comply with the new requirements.  Those who are not have four years register with Taumata Arowai, and seven years to get their show together.  Local Government New Zealand supported the idea.

There are also plans for a second regulator, which would act as a financial watchdog to reduce the risk of underspending on water while still aiming to keep costs down. Yes there is room for improvement in the water price regulator, but it’s time we had one. It’s time to price and hence minimise what we use, as we do with other precious resources.

So much of the current argument comes down to ownership, not outcomes. That is, the right wants to drag this into an argument about which kind of elite gets the director fees around the table. Don’t be fooled into trying to find a principle more noble than that.

Almost all New Zealand rivers running through urban and farming areas (95-99%) carry pollution above water quality guidelines. 90% of our wetlands have declined. 76% of our freshwater species are threatened. About 30% of our available freshwater goes to Auckland and another 30% goes to irrigating and the diary industry. Local government and regional government is responsible for this death of our land.

If you stand on top of the Turitea Ridge above Palmerston North, there’s just one single patch of forest left all the way to the sea: Turitea water catchment. For the tens of thousands of hectares you can see on a clear day of 90% intensive dairying, that last patch of a few dozen hectares is the final holdout for the last stand of skinks and native birds across the entire land until you get to the little circle of Taranaki National Park. If you walk along the banks of Palmerston North’s Manuwatu River at dawn, you will hear not a single native bird. All you will smell is cowshit. Of the 650 water catchments in New Zealand, less than 10 contribute any meaningful conservation effort. They confine themselves just to the provision of drinking water. That is what local government has done to our water. OUR water. It’s time to get angry and strip it off them.

It’s the same sight from every ridge in New Zealand. Local governments, formed over the last 150 years, have generally enabled our forest destruction and the industrialisation of our entire landscape for the thirstiest form of agricultural industry: dairy. Forests burnt, native species reduced to sponsored corporate life support in national parks and a few tiny fenced enclaves. That is the fault of local government failing to regulate and punish the desecraters. It’s time to take water management off them.

Local government is the kind of government that should have protected our water and our land. It didn’t. It was a colonial enabler from day 1. Hot on the heels of Cameron and Chute were Russell, McVeigh, Bartleet, Nathan, and Campbell.

While councils largely agree investment is needed, most still oppose the government’s reforms. Even the Mayor of Auckland, Phil Goff, despite having to fire the entire governance structure of Watercare a year ago, opposes it. On his watch hundreds of our Kauri in our water catchments died, our trees were cut down by the tens of thousands, our gulf marine species died, our streams got worse and there’s not a major fresh water source for anything north of Albany despite the growth of tens of thousands of houses.

Councils have spent years, and huge sums in ratepayer funding, building and maintaining their water infrastructure assets. Whether elected like Wellington or unelected like Tauranga, each stream and river and lake has got worse and worse, more shit pumped and spilled into harbours, more fresh water sold for penance overseas. Local and regional government did this to us. Central government often enabled them, until Minister Mahuta came along.

While Minister Mahuta has repeatedly said there would be public ownership of these systems, the documentation shows the four new entities would “own and operate three waters infrastructure on behalf of local authorities, including transferring ownership of three waters assets and access to cost-effective borrowing from capital markets to make the required investments”. It says ownership would be transferred to four entities, which themselves would be collectively owned by the councils they service.

Many councils argue they have done a good job with their water infrastructure, or have plans in place – with money already set aside – to manage the shortfall. They are lying to us all, and the state of the land and the rivers proves it every day. Few of our native species will survive another 30 years with this ownership and management structure.

The Government has offered $2.5b as a sweetener. Of that, $2bn would be used to smooth the differences, and $500m would go to supporting councils transition to the new arrangement.

Councils are also concerned about how the entities would be managed. These vested interests need such power stripped off them. Many are voted in by farmers as the Otago Regional Council shows, and their rivers are sucked dry to nothing. Or they are irreversibly poisoned like so many of the small lakes in the central North Island. This is at the feet of local and regional government. Not Maori.

Under the proposal Local government and mana whenua representatives would together appoint a regional representative group, who would manage concerns, strategy and expectations of the entities. For all the concern about governance, when your water goes off you don’t call an elected representative. You call the water entity and you demand service within the hour. Governance powers are over-rated when it comes to actual service about water.

The case for mayors having power over something they have failed at for nearly two centuries is long gone. They have been in the end destructive for our country.

One may argue that there is no place for “race based representation” and ownership of water assets. To those I would issue a challenge: go ahead and show why they would make it worse than what we have now. It’s time to reverse 150 years of water destruction.

There are few governance risks from Maori being involved that would make our water worse than what it is now. We may not yet be mature enough to enable Maori to have this say over water governance other than through a local government election and a late 2023 election. We can again disregard the Treaty of Waitangi. Everyone always wants you to consult more rather than get it done. If this government falls in 2023, more rivers and lakes will die, more forests will be crushed, and more species will become extinct because we failed to support Labour’s water reforms.

Water is a taonga under article two of the Treaty of Waitangi and Maori assertion of their rights and interests in water is based on a legitimate claim of tino rangatiratanga over that taonga. We should not expect outsider to understand how important that is. The Treaty of Waitangi is the underlying foundation of the Crown-iwi relationship for all freshwater resources. We as a nation have to face up to meeting our Treaty obligations – not just because it is good for us as peoples, or because it is our founding constitutional document, but also in water because it is the best hope we have for improving our water as a whole. The government expects that iwi values and interests should be addressed on a catchment-by-catchment basis across the entire country – some are starting to do it but it’s too late for more weak bullshit and lies.

It should be expected that the weak and greedy should march against such water regulation in their tractors in a Howl of Protest. They along with local and regional government have caused the full degradation of our water. It’s time to steamroller right over the top of all of them.

Labour, get this done.