Rage and the Woke

The past couple of years has seen a significant increase in far right activity and rapidly increasing racism.

Ardern is apparently to blame for National having racist supporters

Yesterday on Morning Report Chris Luxon pivoted from a question about National supporters expressing distaste for Te Ao Maori to blaming Jacinda Ardern for not burning up political capital on co governance.

Why Is New Zealand So Strong?

As New Zealand signs up to another alliance to shore up our economic security in the face of fast retreats in economic globalisation, it’s worth taking stock of why New Zealand’s economy is so strong.

Kelvin Davis gave an outstanding speech in Parliament yesterday where he ridiculed opposition for proposals that if passed would enhance inequality.

If you’re out there in ZB land and believe that water management should be democratically elected, you won’t find respite here.  Local Government has done a terrible job dealing with water and change is urgently needed.

This has not had the media attention that it deserves but Act has raised, to use the technical term, a shit load of money recently.  And it is using this money to engage in some good old fashioned racist dog whistling.

David Seymour should stick to twerking

David Seymour has responded to slumping poll results by claiming that the Treaty of Waitangi should be trashed.

Judith Collins has applied the dog whistle to the He Puapua report and suggested that it is evidence of the Government wanting to radically change New Zealand society.  But a check through history shows that the report is based on an International Treaty that National signed up to.

David Seymour and Act have likened the institutional suppression of people based on the colour of their skin with a desire to ensure local government representation for Tangata Whenua.

Radio New Zealand is reporting that a deal on Ihumātao is imminent and that Cabinet is expected to sign off on the deal today.

The MPs go to Waitangi

Yesterday the political parties were welcomed onto the upper Marae at Waitangi.  Jacinda Ardern took the occasion to give a stock take of what the Government was doing to address Iwi concerns, Andrew Little gave his speech totally in te reo, and Simon Bridges chose to use the opportunity to politic.

“STAND WITH IHUMATAO! This is a call out to all our supporters. Come stand with us as we take back the whenua! Oruarangi Rd, Mangere.”

“I will apologise to the people of Parihaka who are here, while I do recount some of the important history that they have heard and know and live and breathed, but that still today, too many in our country are not aware of and are not familiar with and so I seek to put it on record in the House as part of my contribution.”

The language is the life force of the mana Māori.  Which is why the Government and the Opposition should pledge support to ensure it survives and thrives.

The Government’s timid backdown on water charging is placing it in a very uncomfortable position.

Vincent O’Malley: wars we choose to remember and forget

Vincent O’Malley writes at The Guardian about how we should, or don’t, remember the New Zealand wars.

Maori Party to make a stand?

The Maori Party are threatening to pull out of their confidence & supply agreement with National.  This would leave National with a Hair-thin majority in the House. The Kermadec Sanctuary, if handled with competence instead of arrogance, should have been a massive win for National.

Things other than States

What are the New Zealand institutions other than the State who can achieve good for New Zealanders?

National Ltd™’s Shane Reti Caught Out In Another Lie

Shane Reti lied about the process of ratifying the TPP. In a Press Release to the Northern Advocate, Reti states “. . . the agreement comes before parliament and opposition parties and select committees for debate and modifications . . .”

The problems for National’s housing plans for keep coming, with Ngati Whatua pointing out that it has first call on the land to be “freed up” under treaty agreements.

It has been claimed that Andrew Little has advocated for Maori to have law making powers. What he has done is reflect on a recent Waitangi Tribunal decision which concluded that Maori never ceded sovereignty to the Crown and properly concluded that this is an issue that needs to be considered.

Mana Party president, Annette Sykes could become an MP in the next election.  The future of the Maori Party is in doubt.  Hone Harawira is considering a Mana-Maori Party merger.  Sykes is committed to left wing values, social justice, Maori land & water rights, and social & economic justice for Maori.

Anyone notice that the Right’s arguments against ownership of water – apart from being a willful confusion of ownership in rights to water, which is what iwi are actually inserting and which are clearly enjoyed by a range of people under our law at present, and ownership of water itself (something, apparently, limited to bottled water sellers) – would apply equally to land? 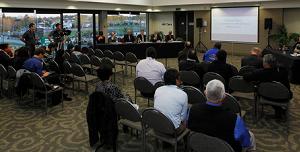 Only 12 people turned up to Key’s first sham talks with iwi. He might have gotten a better turnout if he had come with cupcakes or, you know, a genuine intention to negotiate in good faith.

It seems that whenever a matter arises that involves some claim of collective ownership or control by Maori, John Key comes up with what he describes as an ‘elegant solution’. If Key can come up with a string of such solutions I thought maybe I could give it a try. Therefore, this is my attempt at developing an ‘elegant solution’ to the matter of Maori claims to the ownership of water.

The Nats are beginning their sham consultation with a handful of tame ‘Iwi Leaders’ today. The hui will be by invitation and will not include the Maori Council, which iwi have appointed to lead for them on the water rights issue. Of course, National doesn’t want a real debate. It won’t genuinely discuss shares plus. This is a fake process. And it will all end up in court next year.

Know when to fold ’em

National’s asset sales programme is in crisis. Key has three options on asset sales – plow ahead, cut a deal with iwi, or call it quits. The smart thing to do, for the good of the country and for National’s own good, remains to drop the policy altogether. But they won’t. Instead, they’ll play the race card. But that old joker isn’t the trump it once was.

Asset sales could be delayed a year or more

“Unusual and inappropriate” – that’s how the Waitangi Tribunal has described National’s ‘report by August 24th or we’ll ignore you’ ultimatum. Imagine if you or I were party to a court case and tried that! Now, the Tribunal is going to deliver a truncated report before that deadline and the full one in September. This is going to the courts. Injunctions will delay the sale.