Some cold day in hell 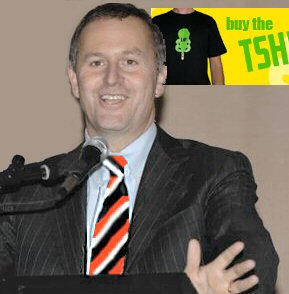 Observant msm spectators may have noticed this gem from TV1 news last night:

‘A radical shake-up of the controversial Seabed and Foreshore Act is on the cards it could result in new powers for Maori to test their rights in court, but John Key is vowing no New Zealander will lose their access to the beach’.

After the Section 59 Amendment, the Seabed and Foreshore Act has to be one of the most poorly reported pieces of legislation in our recent political history. TVNZ and TV3 continued that fine tradition of keeping Kiwis in the dark by utterly failing to even mention what the Act does or the broader implications of repealing it. So people could be forgiven for not realizing that the Seabed and Foreshore Act is about a little bit more than Maori getting a chance to meekly ‘test their rights in court‘ and absolutely nothing to do with John’s lame attempt at misdirection by suggesting it’s just about access to the beach for cricket and a barbie. (John seems to have unwittingly regurgitated National’s previous “Iwi/Kiwi” spin on the Act.)

Why many Maori got so annoyed with the Act was because it closed off any future possibility for claims, either within or beyond the Treaty settlement process, on the Seabed and Foreshore and all that’s in it. That includes claims on extraction rights for fish and minerals worth many billions over many years.

Yeah I can totally see National opening that door.

To its credit National has built up quite a bit of expectation amongst some Maori expectations that could quickly turn sour if it becomes apparent National aren’t really so sincere about letting their review of the Act result in opening up new claims. Not surprisingly ACT are all for the review because they know this can only end in tears for relations between National and the Maori Party, ultimately leaving the ACT tail in a very good position to wag the National dog.

So is a ‘radical shake-up” really “on the cards”? Well not for the Act, no – National aren’t likely to change any aspect of the Act that has significant commercial implications. Coalition relations on the other hand might well be in for a few changes.