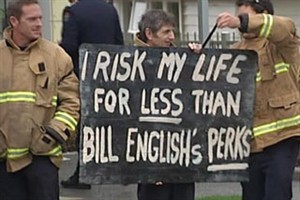 Some good comments from CTU president Helen Kelly in the Dom today on the Government’s posturing over MP pay increases.

“The Government is trying to make a hero out of anybody who doesn’t get a pay increase, and I’m worried about that because there are a lot of workers out there they’re putting pressure on to take zero increases.

“In the end [MPs’] wages will be averaged out because when the economic conditions improve … they’ll get a great big pay jolt. That isn’t the case for all the other thousands of workers.”

National has done all it can to freeze wages in the public service and talk down wage expectations in the private sector. This latest hollow gesture should be seen for what it is – especially in light of Bill English’s ongoing housing rort.

[Of course, I’m more than happy for MPs to vote themselves a wage freeze if they like. Hell, why not go all the way and give yourselves a pay cut while you’re at it?]

7 comments on “A hollow gesture”