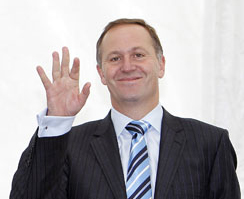 First, India. A leader would have taken action at Paul Henry’s racist outburst against Sir Anand Satyanand. Key did not:

As for Prime Minister Key, what a missed opportunity. While obviously embarrassed by the question, instead of slapping Henry down and defending the Governor-General and the reality of a multi-ethnic New Zealand, he giggled away the question.

Under questioning later, Key said Henry’s comments were “plain wrong” but refused to condemn the man or to boycott his weekly appearance on the show.

As reaction built strongly Key remained — this will surprise you! — “comfortable” with his response:

As for his reaction to the comments at the time, Key said he had replayed the event in his mind over the last week or so, and was comfortable with what occurred…

Even the most supportive of journalists described Key as woeful, late and lame. It could all have been averted if Key had spoken out at the time, but instead this event turned in to a full fledged diplomatic incident, Henry was suspended, and eventually “resigned”. At which point Key did lead a little I guess — he lead the rush to the exit:

New Zealand’s opposition MPs have congratulated the Chinese winner of the Nobel Peace Prize, but Prime Minister John Key is not keen to talk about it.

Liu Xiaobo, 54, was awarded the prize on Friday. He is serving 11 years in jail for campaigning for democratic transformation of China’s one-party state. He told his wife, Liu Xia, he dedicated the award to the people killed in the 1989 crackdown on pro-democracy protests in Tiananmen Square in central Beijing.

Mr Liu’s prize was applauded in the United States and Europe and US President Barack Obama called for his release. Labour’s spokeswoman for foreign affairs and trade, Maryan Street, and Green MP Keith Locke have offered Mr Liu their congratulations. … Mr Key said yesterday he would not comment about Mr Liu until he received more advice.

At yesterday’s press conference, we saw a similarly pathetic non-response from Key to the Nobel Peace Prize awarded to the jailed Chinese dissident Liu Xiabo.

Rather than stand up for principle – Liu has been jailed for 11 years for co-signing a document calling for greater respect for human rights and democratic reform – Key has chosen to run and hide, lest he offend the tyrants in Beijing. Yesterday, the award to Liu had already been applauded by the UK, US and French governments, and by the European Union […and…] President Barack Obama…

And New Zealand’s reaction? What forthright message did John Key send when questioned about our government’s response to the Nobel awards at yesterday’s press conference? “I’m not aware of why he’s in jail and it’s not for me to comment about what’s appropriate in terms of a country’s putting people in those facilities.” Key also said he would take advice from the Ministry of Foreign Affairs and Trade, but could not guarantee any kind of public statement on the matter.

Got that? So when dictatorships put people in jail for supporting human rights and democratic reform, John Key believes that “Its not for me to comment about what’s appropriate in terms of a country’s putting people in jail in those facilities.” Offhand, it is hard to think of a more shameful statement – ever – by the person who represents New Zealand on the world stage.

So then, two shameful non-achievements for Key to add to his non-proud record of representing New Zealand internationally. Acting like a buffoon on Letterman, being named a dim-bulb for cannibal jokes about Maori, and now this.

New Zealand is small country, far from anywhere, always on the edge of irrelevance. To continue our proud heritage of principled and effective international contributions, to hold our heads up high on the world stage, New Zealand needs a leader. But all we have is a PM.