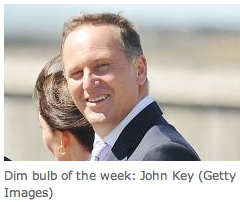 Well, our PM is now an international laughing stock. Check out this nomination by the San Francisco Examiner (hat tip schrodigerscat):

What: The prime Minister of New Zealand made a crass cannibalism joke about an indigenous tribe.

Say what? Key was forced to apologize to the Tuhoe people after a tourism conference in which Key quipped that if he had been eating with the Tuhoe, ‘I would have been the dinner.’

Fallout: The Tuhoes are already at odds with the government over claims on land, and a Tuhoe spokesman says the joke was unbecoming and that relations are getting worse by the day.

Speaking of “getting worse by the day”, Key is sure to be making heaps of new friends by calling Tuhoe liars:

Stop being a weasel John. After 18 months of negotiations the deal was all ready to go:

Commemorative pens were ready for Tuhoe leaders and Government ministers to sign an agreement in principle before the prime minister dropped a bombshell on the deal last week. Tuhoe chief negotiator Tamati Kruger said somewhere between 20 and 50 of the pens were made by the Crown to mark what was expected to be a celebration last Friday.

Tuhoe had expected to sign an agreement in principle (AIP) over its Treaty of Waitangi settlement claim in a ceremony at Waimana, south of Whakatane. However, last Monday, Prime Minister John Key said the Tuhoe bid for sole ownership of Te Urewera National Park was unacceptable. His announcement put Tuhoe into turmoil and prompted an angry response from the Government’s support partner, the Maori Party.

Mr Kruger said the pens’ existence was proof an AIP was imminent and that the Crown and Tuhoe had agreed on the national park’s return to Tuhoe. They were inscribed: “Tuhoe-Crown Agreement in Principle Waimana 2010.”

Tuhoe are angry at this betrayal, and trying to rewrite history now isn’t going to help. Dim bulb doesn’t even begin to describe the mess that Key is making of this…