In these troubling times, it was uplifting to see the flax-roots, practical and collaborative action at the Onehunga Recession Busting Impact rally for beneficiaries, organised by AAAP.  For 3 days, there are volunteers sitting at tables in front of the WINZ office in Onehunga Mall, giving support and assistance to enable those most in need to get the funding they are entitled to.

A little further along the Mall up to a hundred people attended a rally, as volunteers BBQed sausages for the public.

The rally began with an AAAP spokesman (sorry I didn’t catch his name) explaining the aim of the 3 days of action.  The assistance is being given by trained advocates and is called “direct action casework“.  Such people work alongside beneficiaries as advocates, providing guidance and support based on trust and understanding. 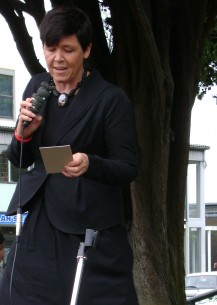 Jan Logie spoke about the way the Green Party valued all work that contributed to society, whether it was paid or unpaid.  She gave the example of the unpaid advocacy work being done for Impact.  Logie was critical of the current NZ government’s attitude that pitted paid against unpaid workers, and employed people against beneficiaries.  John Key’s vision is of a low paid workforce, enabled by a shortage of jobs and “precarious work”.  Later speakers also said similar things, using the same term.

Logie also said that hardship in our dysfunctional society was increased by discrimination against Maori, Pasifika and immigrant people, as well as against women and the disabled.  She hoped that this kind of advocacy action would take off and become more common. 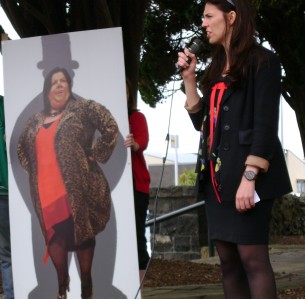 Jacinda Ardern thanked all the activists on this issue. Clearly with Paula Bennett in her sights, she said all politicians should be held accountable.  She was critical of the way Bennett’s welfare reforms treated those on government support as criminals (drug testing) and the way the government was cultivating a “blame culture”.  Ardern wants the government to take responsibility and to return social security to the way it was originally intended: to provide the support needed to enable a dignified return to paid work, and for those that needed long term support, for them to be treated with dignity.  She ended by saying that on such issues, the Labour Party would work “alongside Mana and The Greens and hopefully the Maori Party.”

Andrea (Rushton?)  spoke on behalf of the Living Wage campaign. She represents the Service and Care Workers Union. A speaker for the First Union, also the Maori VP for the CTU, spoke against the demonisation of Maori as criminals and for the large proportion of Maori children living in poverty.  Like some of the other speakers, he criticised the government’s tax-cuts that benefited the rich, and supported the campaign for a living wage, especially for Maori households.

John Minto, speaking for the Mana Party, was indignant that NZ is a “land of plenty” but that this “plenty” was only being experienced by the few.  He promoted Hone Harawira’s  Feed the Kids Bill, due for its first reading on 13 February.  Minto asked “Can you believe it?”, that currently we are debating, “Should we feed our kids?” He said Mana believe in doing practical things and would put workers and any economic policy at the centre of the system.

The speeches finished with Sue Bradford thanking all the politcal parties that sent representatives to the rally.  They had invited representatives from all parties. National said they were too busy, and ACT didn’t reply.  The other parties (NZ First, UF, and Maori) were not mentioned.  Bradford said that she wanted all opposition parties to state their policies on social security, and to state they would wind back regressive laws.  She especially wanted a Labour -led government to overturn all the cut backs to social security made in the past by Labour and National-led governments.

Bradford  ended by saying that it would be necessary to keep the pressure on Labour not to sell out beneficiaries again, once they got into government again.  Bradford also thanked the unions for their support, saying that it was a welcome change to have the unions supporting beneficiaries, the unemployed and those doing precarious work. 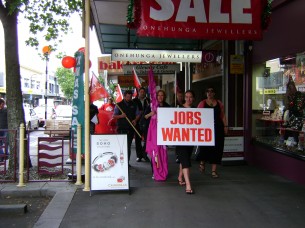 The rally then marched down the Mall to the National Party office, carrying a “WORK WANTED” sign.  The sign was placed in the window of Sam Lotu-liga’s office and some work CVs were pushed under his door.  A guy standing at the side of the crowd said Lotu-liga was never there, and a uniformed policeman beside him laughed and told the protesters, “Even I can tell you he’s never at his office.” 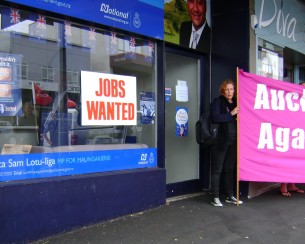