If there was any doubt the results of the recent US elections conclusively show that America’s democratic system is broken.

In general terms the President is meant to be the person with most votes.  This did not happen.  Despite Clinton winning 1.4% more of the popular vote she lost.

State legislatures are entrusted with the management of the local electoral system.  This has resulted in gerrymanders that give new meaning to the word “gerrymander” like this one in the 7th congressional district of Pennsylvania: 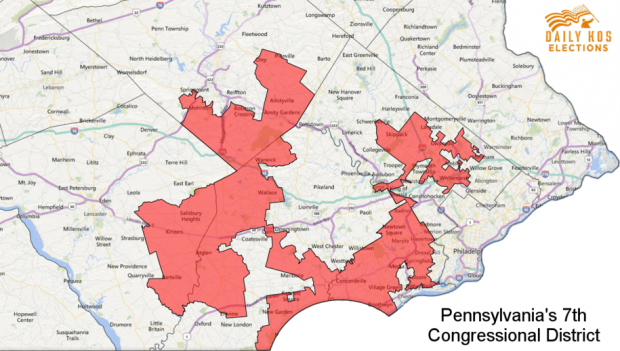 What other reason could there be for such an absurd result than to maximise the chances of the incumbent who happens to be a Republican?

The gerrymander is effective.  Despite Democrat candidates winning in total considerably more votes than Republicans in 2012 the Republicans retained control of the House of Representatives.  I suspect the result for this election will be similar.  As said by David Daley in Salon:

As we head into the 2016 election, it’s worth taking a look at how well those new maps performed in the last presidential cycle, a solid 2012 win by Barack Obama in which he defeated Mitt Romney by 126 electoral votes. It was a good year for the Democrats nationally; taken in the aggregate, Democratic House candidates earned 1.4 million more votes than their GOP counterparts. Despite that plurality, Democrats gained merely eight seats in the House; the GOP retained a big majority of 33 seats, down a little from the previous 41-seat edge.

And in continuing an age old tradition the Republican Party continues to do its best to disenfranchise millions of Americans essentially on race grounds and essentially because they tend to vote for the Democrats. Like this effort which was struck down by the Federal Appeals Court because it was too surgically precise:

The sweeping 83-page decision by a panel of the United States Court of Appeals for the Fourth Circuit upended voting procedures in a battleground state about three months before Election Day. That ruling and a second wide-ranging decision on Friday, in Wisconsin, continued a string of recent court opinions against restrictive voting laws that critics say were created solely to keep minority and other traditionally Democratic voters away from the polls.

The North Carolina ruling tossed out the state’s requirement that voters present photo identification at the polls and restored voters’ ability to register on Election Day, to register before reaching the 18-year-old voting age, and to cast early ballots, provisions the law had fully or partly eliminated.

The court also held that the ballots of people who had mistakenly voted at the wrong polling stations should be deemed valid.

This makes you realise how important the Supreme Court is and how vital for Republican interests the unconstitutional delaying of consideration of Obama’s nomination for the vacant seat was. Because the last time it looked at voter suppression it loosened by a bare majority DOJ oversight of State changes to voter law despite there being clear evidence that oversight should continue.

As evidence of change, Roberts pointed to the end of the literacy test and other methods of barring voter registration, which included the poll tax. But his conservative majority didn’t account for the hassle tax — the new price that minority voters disproportionately pay. In North Carolina over the weekend, people stood in line for hours in counties with large black and student populations. In a study of 381 counties covered by Section 5, about half the total number, the Leadership Conference Education Fund found 868 fewer places to vote than existed in 2012.

There are legitimate reasons to close a polling place, like saving money, while increasing access to voting by mail and early voting. But before the Supreme Court’s 2013 ruling, the D.O.J. had the power to ensure that state and local voting boards did not use “budget cuts or voter modernization as cover to disenfranchise people of color,” the L.C.E.F. study points out. “In a world without Section 5, that process — that protection for minority voters — has ceased.”

And so voters of color are once again fighting for access to the most basic right of citizenship. When the Supreme Court heard arguments in the 2013 case, Shelby County v. Holder, experts predicted that the biggest impact of striking down Section 5 would be the cumulative effect of all the small stuff — “under the radar” local tinkering to district lines and polling locations and hours, as Heather Gerken, a Yale Law School professor, put it. When Section 5 was enforced, state and county officials chafed at submitting every alteration for federal approval. But the alternative is to resort to after-the-fact remedies. People are turned away from the polls, or purged from the rolls, or refused ID, and then these violations of their rights can be challenged.

How effective were Republican efforts to suppress the vote? In Wisconsin, one of the three rustbelt states that cost Clinton the election Trump’s majority was 27,000.  But there are claims that up to 300,000 voters were disenfranchised by strict voter ID laws.  The problem may or may not have remedied by this decision but the flow on effect in getting people enrolled and actually out to vote is unknown.

The United States of America, supposedly the world’s most robust democracy, has a system where boundaries are drawn on arbitrary lines to maximise the value of votes for one party, where partisan officials are motivated not by maximising the vote but by suppressing the vote of those wanting to support the other side, and where a candidate for the top job can lose even though she gained the most votes.

The system is broken.  The United Nations should send in observers next election.