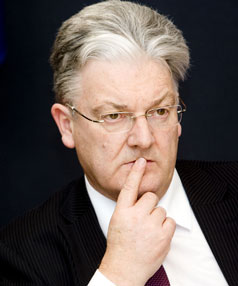 In a late Friday afternoon dump of information more emails relating to the handling of Peter Dunne’s and Andrea Vance’s personal information were released.

Reading them and going through the events of the past few months really makes me feel like I am in either a Kafka novel or that I am firmly ensconced in Wonderland.  Because nothing is what it seems to be and reality is ever changing.  And there is a smell of cover up that will deeply harm National’s relationship with the Fourth Estate.

Over the past few months we have witnessed:

One could treat the claim that the emails were not opened with a degree of skepticism.  The inquiry office may have used a different mail program but the chances of a computer in that office having a copy of Microsoft Outlook must be extraordinarily large.

And another head may be on the chopping block.  DPMC head Andrew Kibblewhite knew of the privacy breach for a month but did not tell John Key, Dunne or Vance until yesterday.  Kibblewhite has apologised to Vance saying “I have checked my records and can confirm that I first became aware of this on July 5. In hindsight, and notwithstanding the inquiry never viewed the email files . . . I acknowledge we could have prompted Parliamentary Services to inform you of their error”.

Fairfax has no confidence in the way this matter is being handled and we feel we have to take the matter further.  This will include requesting, under the Privacy Act, a full account of how Andrea’s private information has been handled.

The release of information detailing Andrea’s swipe card usage, telephone calls and emails to the Henry inquiry was highly inappropriate and intrusive. There has also clearly been an attempted cover up. This has all put enormous pressure on Andrea who has been unfairly targeted for doing her job.

We hope the privacy commissioner will cut through the Government spin and provide Andrea with some redress.

And erstwhile National Party cheerleader John Armstrong has also ripped into the Government.  In a strong article he said:

It goes without saying that journalists are by nature deeply suspicious of politicians and the motives which drive them – and vice versa.

Thrown together in the rabbit warren which passes for the parliamentary complex – a veritable hothouse fuelled by rampant ego, unrequited ambition, never-ending rumour and constant intrigue – MPs and media nevertheless have to establish a degree of trust for their mutually parasitic relationship to function effectively.

That trust works on many levels, be it MPs feeling they can talk off-the-record confident they will not be shopped to their superiors, to journalists respecting embargoes, to Cabinet ministers not blocking the release of sensitive documents sought by media under the Official Information Act.

That trust can take a long time to establish. It can be destroyed in a matter of seconds.

Even so, when trust does break down, it usually amounts to little more than a pin-prick on the fabric of democracy.

Not so this week, however. The prevailing sound was of the democratic fabric being ripped asunder.

The trawling of a Press Gallery reporter’s phone logs by parliamentary authorities is a breach of trust of such mega proportions that it may well place a lingering chill on politician-journalist contact.

Dunne’s position on the status of his emails has always been clear.  He refused to disclose the full text of the emails because he considered them to be private.  He resigned as a Minister rather than release them.  Why they should have then been collated shows a complete indifference to his privacy rights by the organisation that has a major role in making our democracy work.

Banana republic status for New Zealand appears to be just around the corner.  Because these sorts of events happen under regimes who are totally indifferent to rights of privacy and human rights and who are determined to stamp out opposition at all costs.

Peter Dunne it is not too late to change your mind on the GCSB bill.  The treatment that you and Andrea Vance have received show why there has to be hard edged limitations on the power of the state to collect our personal data and why they should be the minimum powers required to function adequately to protect our democracy.