The hand of Government

This indicates that John Key considers himself to be THE government, all on his own. It puzzled me that he would label himself thus, so I sought some definitions, and generally “government” is defined as a “body” of people, or the system of governance. This is the definition from Oxford Dictionaries online:

Dictionary.com, includes “the cabinet” in its definition.

1. the political direction and control exercised over the actions of the members, citizens, or inhabitants of communities, societies,and states; direction of the affairs of a state, community, etc.;political administration: Government is necessary to the existence of civilized society.
2. the form or system of rule by which a state, community, etc., is governed: monarchical government; episcopal government.
3. the governing body of persons in a state, community, etc.;administration.
4. a branch or service of the supreme authority of a state or nation, taken as representing the whole: a dam built by the government.
5.a. the particular group of persons forming the cabinet at any given time: The Prime Minister has formed a new government.
b. the parliament along with the cabinet: The government has fallen.

Does John Key have autocratic delusions?  Here’s his depiction of his governing hand: 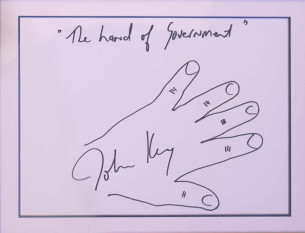 What title/caption would you give this masterpiece, in the interests of political accuracy?