In a dramatic twist in the investigation into the missing $200k donated to National under the table (or possibly under many smaller tables) Simon Bridges told radio station Tragic Dork FM that the leader of the opposition needed to stand Simon Bridges down over the SFO prosecution.

“Simon Bridges needs to stand Simon Bridges down. He can’t do this ‘see no evil, hear no evil’ routine, mainly because he can’t even pronounce evil properly. He keeps saying ‘evul’. It’s just weird. He needs to be stood down.“, Bridges said.

Mr Bridges went on to point out that he had engaged in some intense philosophical discussions with voters, saying  “I’ve talked to many ordinary, hard working New Zealanders and they say to me “who are you?”, which is rully deep, y’know?”. 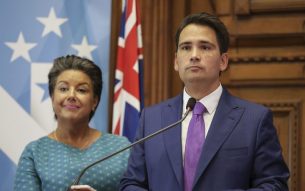 His deputy Paula Bennett echoed the call for the party leader to stand down, pointing to the fact Winston Peters stood aside from his portfolios when the SFO investigated him, and cleared him, in 2008 over another donations matter.

“Quite frankly, even by the standards of Winston Peters, Simon should stand down, because that’s what Winston did in 2008,” Bennett said, wiping away a tear with a handkerchief, while clutching half an onion and a stiletto in her free hand.

“Helen Clark stepped in and stepped up all those years ago. The only difference between now and then in my opinion is the leader of the opposition. Who really should be me.”

“The highest ethics are not being upheld by Simon’s shadow Cabinet and as a leading Tory, he actually needs to take no responsibility for that at all, because that’s just our nature.”

Asked if this comparison made sense given the SFO are now investigating the NZ First Foundation rather than the NZ First party itself Bennett said this was “dancing on the head of a pin”, which is one of the numbers she intends performing when she resigns post election to have a crack at Dancing with the Stars.

“New Zealanders can see through this, just as they saw through the Waitemata Trust and, indeed,  saw through our hounding of a mentally ill ex caucus member, just because he knew where the money was hidden.”

Bennett was asked if by this logic Bridges should have stood down as leader much earlier, while the SFO investigated donations to the National Party that have now resulted in four criminal charges. Bennett replied noting that Bridges was not in Government then and unlikely to ever be in the future, so it didn’t really matter.