Brexit leaders seem strangely reluctant to act on their rhetoric, see e.g. Boris Johnson says ‘no need for haste’ to start EU exit negotiations. Europe, however, citing the need for “certainty” (and perhaps with a little bit of schadenfreude on the side) is pressing for speedy action: UK faces Brexit crisis after Europe’s leaders demand: ‘Get out now’.

England’s dilemma is neatly summed up in this one headline: Cornwall votes for Brexit then pleads to keep EU funding. Ooops. As Brits frantically Google ‘what is EU? a lot of people who voted for Brexit are going to be badly impacted by the consequences. They aren’t going to get what they were promised, see Leave campaign rows back on key immigration and NHS pledges and There are liars and then there’s Boris Johnson and Michael Gove.

Should a referendum be binding when the promises that secured the result are immediately dumped?

A petition to hold a second referendum has quickly reached over 2m signatures. Londoners in particular want a do over… 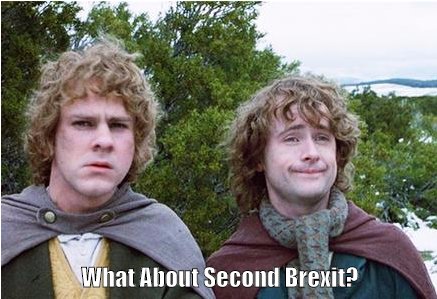 (I confess that the whole post was just an excuse to use that image.)