The Brexit (British Exit from the EU) process is fascinating. Background information from the BBC is here, and The Economist here. The vote is a week away (23 June). Several recent polls are giving the Leave campaign a big lead – see today’s Guardian: EU referendum live: TNS poll gives leave campaign seven-point lead.

Britain is significantly divided on the Brexit (see graph below). Immigration is a major issue. The economic consequences of are unpredictable, but likely to be significant. Socially it would likely tear Britain apart.

As Brexit looks more and more likely, the ripples are spreading round the world:

Golbal stock markets have plunged amid fears the UK could vote to leave the European Union in a crucial referendum after polls showed the “Brexit” camp surging ahead.

On Tuesday a poll by YouGov and UK Newspaper The Times showed the leave camp held 46 per cent of the vote compared to 39 per cent of the UK who wanted to remain in the EU.

It’s a three point swing from the previous week and is the strongest indicator yet the country will vote to split ways with the 27 other members of the bloc on June 23. Eleven per cent of voters remain undecided.
…
The market uncertainty follows European Council president Donald Tusk’s warning that a vote to leave could trigger the end of “Western political civilisation” by undermining the basis of European integration.

“As a historian I fear Brexit could be the beginning of the destruction of not only the EU but also Western political civilisation in its entirety,” he told the German newspaper Bild. “Every family knows that a divorce is traumatic for everyone … Everyone in the EU, but especially the Brits themselves, would lose out economically.”

Mr Tusk’s comments are one of the latest warnings in an increasingly hysterical campaign that has seen voters bombarded from both sides. …

OK, the destruction Western political civilisation in its entirety might be over-egging it a bit, but I can’t see Brexit working out well for England or Britain (anyone for border controls between England and Scotland or Wales?). The Leave campaign seems to be driven by archaic nationalism and xenophobia – though as a Guardian reader I guess I would say that. (On a further personal note, I’m due to spend a few months in England later this year – I wonder what shape it will be in!) 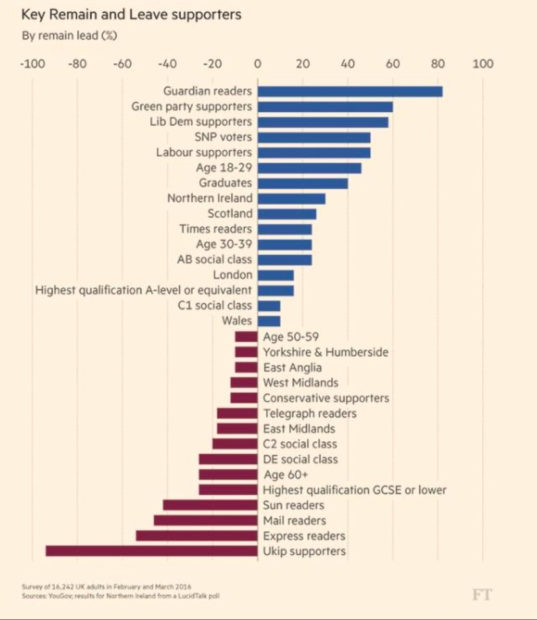