I’m in two minds about the proposed name change for the Super Rugby franchise the Canterbury Crusaders. 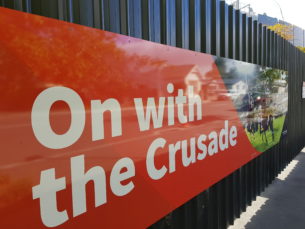 On one hand, it seems like a reasonable and considered response to the Mosque tragedies.

On the other hand, it should never have been the name in the first place and the RFU owes all New Zealanders an apology for choosing it in 1996 and ignoring the muted criticism of the choice ever since.

Just as a reminder, the crusades were repeated attempt by religious fanatics to commit genocide against adherents of a different faith.

There has never been anything positive about the name crusaders, nor is there an innocent use of it.

It is the glorification of war, a celebration of mass murder.

It has taken the death of 50 innocent people to wake NZ rugby up to their complicity in bigotry.

However, it’s really obvious that the average rugby head still hasn’t made the link between the offensive nature of the crusader name and the events of March 15.

Sympathy for the dead only goes so far. If it affects rugby in even the smallest way, then all rationality goes out the window.

Just to be clear, the name wasn’t chosen by fans; it was a marketing exercise.

And franchise clubs regularly change names, colours and even home towns. The Washington Bullets are probably the nearest example of a club responding to a community crisis, changing name to the Washington Wizards in 1997.