Chaos and Mayhem at the Herald

What is happening at the Herald?

This morning Rachel Glucina wrote an article on the victim of John Key’s frankly unacceptable behaviour. Many questions were asked about the appropriateness of this, especially after the victim suggested that her consent to the story was obtained by subterfuge.

The Herald responded by printing the following response, helpfully captured by Lamia on twitter. 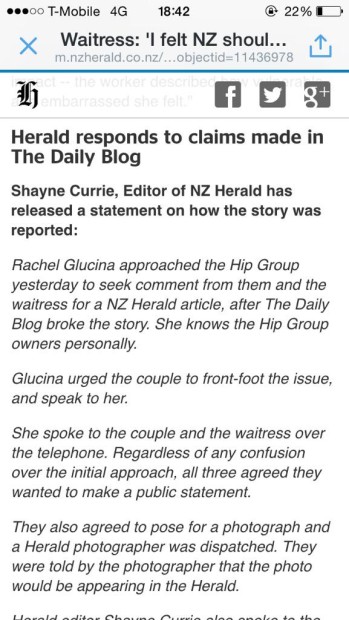 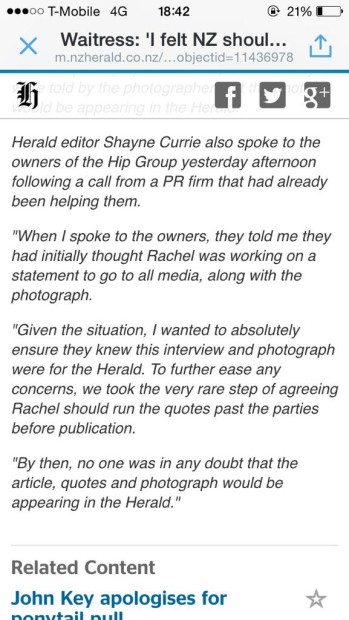 But it was yanked.  Then this statement went up:

Glucina wanted to follow-up The Daily Blog post and urged the couple to front-foot the issue.

She spoke to the couple and the waitress over the telephone. Regardless of any confusion over the initial approach, all three agreed they wanted to make a public statement.

They also agreed to pose for a photograph and a Herald photographer was dispatched. They were told by the photographer that the photo would be appearing in the Herald.

Herald editor Shayne Currie also spoke to the owners of the Hip Group yesterday afternoon following a call from a PR firm that had already been helping them.

“When I spoke to the owners, they told me they had initially thought Rachel was working on a statement to go to all media, along with the photograph.

“Given the situation, I wanted to absolutely ensure they knew this interview and photograph were for the Herald. To further ease any concerns, we took the very rare step of agreeing Rachel should run the quotes past the parties before publication.

“By then, no one was in any doubt that the article, quotes and photograph would be appearing in the Herald.”

Spot the difference.  Primarily the first paragraph has been changed to remove the words “for comment”.  Obviously when approaching someone for comment Rachel would have her journalist’s hat on and not her PR/National apologist hat on.

Apparently as I type this further revisions are being applied real time.

And clearly in these post Dirty Politics days there is much increased sensitivity about the behaviour of the main stream media, particularly the Herald.

So what on earth is happening?

Update:  Peter Aranyi has provided a track changed version.  I am not sure if it references the latest version … 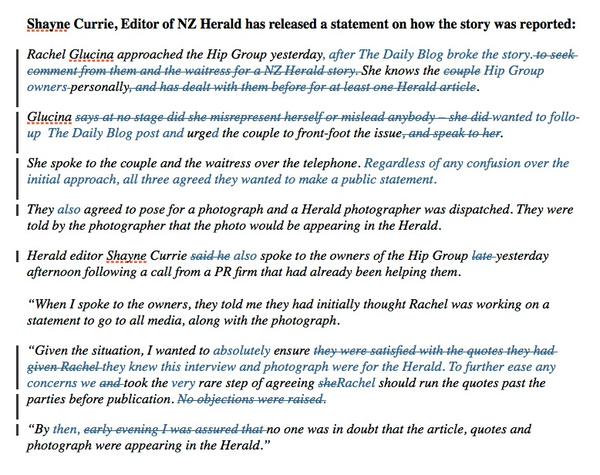 140 comments on “Chaos and Mayhem at the Herald ”