The 7 Greenpeace activists, who occupied a Shell oil drilling ship last year, performed a service to global communities in drawing attention to the impact of the fossil fuel industry on Climate Change were sentenced this week.  So the punishment dished out by the court is a $600 fine plus 120 hours of Community Service each.  Would anyone prepared to occupy an uncomfortable perch in the open air for several days, without the usual amenities really mind performing some other Community Service as a consequence of their activism?  I’m sure they will perform their Community Service “punishment” with the same vigour, motivation and community spirit as they showed with their activism.  The fine, however, could deter many on limited incomes from participating in such activism.

As Lucy Lawless/Tapert said, the stakes are higher than any acting work she may not now get in the US as a result of having a criminal conviction.

“We set out to bring home the scientists’ message on climate change to real people, because politicians aren’t listening to the scientists, [and] their policies can only be guided by the people so we need people to understand what’s at stake here by not changing out policies on fossil fuels.”

Ms Lawless says it is imperative that we change our way of thinking.

“If we want to live we have to save the Arctic,” says Lawless.

“My career is nothing compared to my grandchildren’s life,” she says.

“I’d love to be able to go ‘my job is done’, but unfortunately fighting climate change is probably going to go on for all the days of my life.

“If we can hold it to two degrees we might be able to adjust, but if it goes higher than that terrible, terrible catastrophes are going to follow.” Curiously, in the Firstline video linked above, Lawless tried to sidestep the question about her political action, and says it’s about “life” not politics.  That kind of contradicts her above statement that politicians need to listen.

Meanwhile, others are honoured with knighthoods and other commendations*, for services that either damagde our society and/or environment, or that served elites.  To Lawless’s benefit, her husband Rob Tapert has provided a lot of on-going work in the TV and film industries, largely in Auckland for Kiwis. Some of it was supported by NZ government subsidies/rebates. To Lawless’s credit, she is attempting to give something back to the community (although it shouldn’t be forgotten that she has become wealthy and an international part of capitalist celebrity culture as a result of US productions in NZ). The local benefits from Tapert’s productions doesn’t get the same attention as Sir Peter Jackson’s films.  And, unlike Jackson’s efforts, Tapert hasn’t secured funding by attacking and smearing unions, or through getting the government to change NZ laws in the interests of a major US film studio.

And now Warners and New Line are worried that, through the OIA, the NZ public may learn exactly how they got our PM to change the law to suit their desires to film the Hobbit in NZ, at the expense of NZ taxpayers and unions. 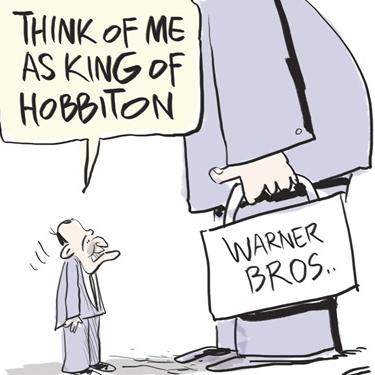 The Ombudsman has ordered the Government to release documents about the deal it struck to ensure the Hobbit movies were made in this country.

Applications for the documents under the Official Information Act were refused by ministers on the grounds they were commercially sensitive.

In late 2010 Radio NZ and NZ Council of Trade Unions president Helen Kelly sought a review of the decision and yesterday Ombudsman David McGee ruled that 18 documents, including emails between Hobbit director Sir Peter Jackson and Government officials, must be released.

Some Kiwis who receive the national honours have also done some invaluable service for the benefit of all Kiwis.  But Sir Roger Douglas?  And what of Dame Jenny Shipley, with information emerging of some of her dodgy businesses activities as a director for Mainzeal, that have been damaging to NZ?

And many others contribute to valuable and necessary community services, for which they get no public acknowledgement.

*It should be noted that some national honours are given to people who have made significant  positive contributions to the community.

[update] RNZ interview with Lucy Lawless, in which she looks forward to doing Community service.  She surmises it could be cleaning toilets at Starship Hospital, or picking up litter on Mission Bay.  She says she is all for Community Service, and thinks she will “look awesome in that orange jumpsuit”.  (Do we do the orange suits here, or is it just in the US & UK?)  Lawless also said that Port of Taranaki presented no evidence in court, in support of their claims to loss of earnings due to the protest.