This might just be Danyl’s best satire piece ever:

The National Party has announced that it will stand a candidate in Epsom during the 2011 election and Prime Minister John Key has thrown his support behind the nominee. The move is bound to spark controversy within the government – National is in coalition with the ACT Party which needs to win the seat in order to stay in Parliament – and many are questioning the Prime Minister’s choice of candidate, the Spider God, a newcomer to New Zealand politics

‘All hail the Spider God,’ said a press release issued by the National Party. ‘The new National candidate for Epsom in 2011.’

”The Spider God is not well-known by the general public but it is held in high regard within the National Party. It once ruled over a pre-human civilisation on the ruins of which the Maori pa that gradually became Auckland were built and it is worshipped by the criminally insane, in addition to which it enjoys strong relationships within the Auckland business community. We think the Spider God is the ideal candidate to represent Epsom for the next hundred thousand years.’ 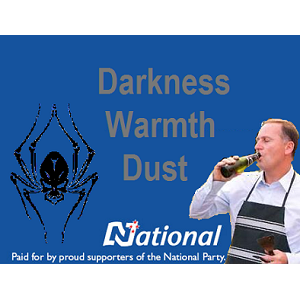 Billboards for the new candidate have already appeared along roads in Newmarket, Remuera and Mt Eden. Some feature the Spider God’s campaign slogan: ‘Darkness. Warmth. Dust.’ Others are pitch black.

According to biographical notes on it’s Facebook page the Spider God is older than our universe by more time than we can imagine, has left countless billions of worlds lifeless and shrouded in silk and has served on the boards of Lion-Nathan and Huljich Wealth Management.

Former National Party President Michelle Boag is acting as an adviser to the candidate. ‘You can already sense the change in Epsom,’ she told reporters. ‘The nights seem longer and the sun is red and dim. When I dream I see millions of tiny, furry many-legged creatures teeming over the earth and hear a deafening chittering sound. Yesterday I saw two Parnell housewives catch a stray cat and tear it apart and eat it with their bare hands. That’s the kind of nation we need to catch Australia and voters in Epsom are smart enough to see that the Spider God will be a strong advocate for them in the new New Zealand.’

But some Epsom residents are less enthused, dismissing it as a ‘parachute candidate’ forced on the electorate by the central party and the enemy of all humankind. ACT leader and Epsom MP Rodney Hide has welcomed the challenge, telling electorate voters that ACT and the Spider God shared many values. ‘Like the Spider God ACT is committed to the extermination of all sentient life but we are also committed to personal freedom and keeping New Zealand’s beaches out of the hands of the Maori. If you vote for me as an electorate MP you also get additional high quality ACT MPs like John Boscowan and Hilary Calvert, while if you vote for the Spider God you just get a God.’

Epsom voters admit that they face a difficult choice when the country goes to the polls during the general election next year. ‘I don’t want my kids to be paralysed and used to incubate the Spider God’s eggs and then slowly consumed by it’s progeniture,’ said one Newmarket dairy owner. ‘But I don’t want Rodney Hide back either.’